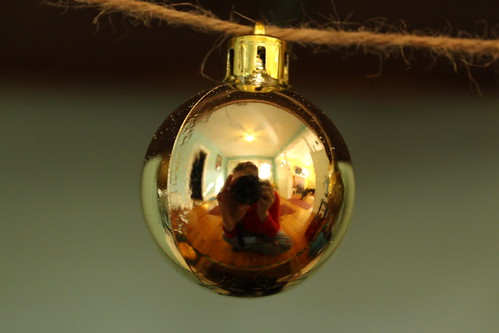 This is the first holiday season we are in our new home, so once Thanksgiving was over and it was officially December, we decided in the Addington household that it was time to get festive.

Joel caught the holiday bug first and picked up one strand of lights at Target over Thanksgiving weekend. After that went up along the roof, suddenly he came home with five more boxes of lights. The result was not a particularly symmetrical display, but definitely a festive one: 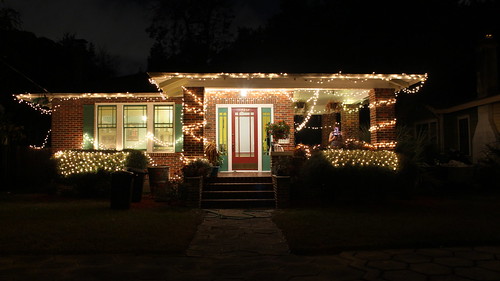 For the inside, I was momentarily feeling crafty (of the creating crafts nature, not the devious nature). I hit up Pinterest and found tutorials for twine balls, twine Christmas trees, ornaments strung up on twine — I was really feeling the twine pinspiration. The results were mixed.

I’d say the string of balls came out the best (probable because they’re the easiest. How can you screw up stringing ornaments on twine?). I hung them everywhere: 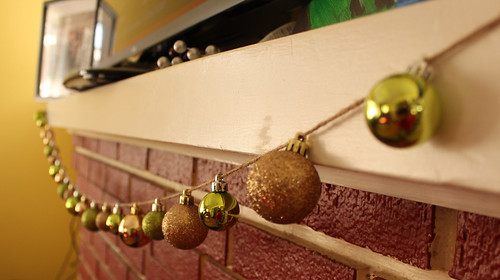 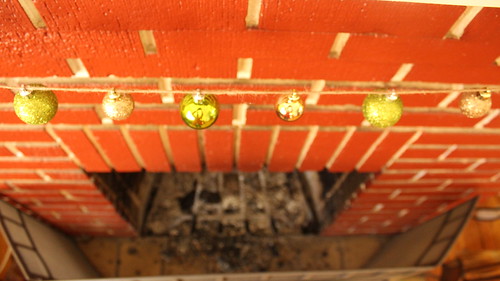 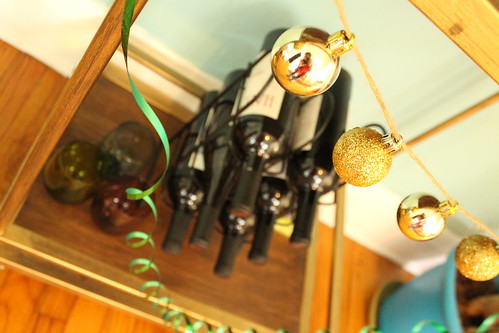 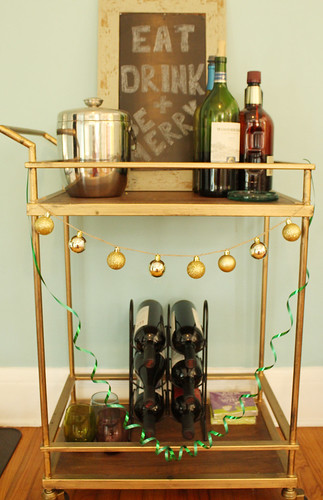 On the bar cart. 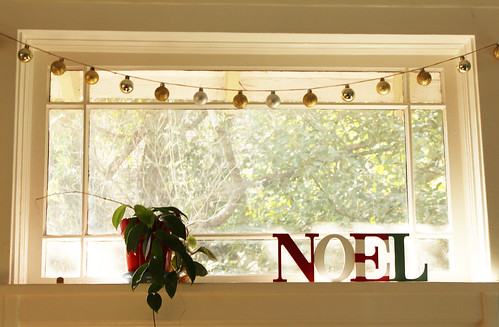 Across the dining room window.

Across the top of the built-ins.

You can find the original pin here.

I also picked up some clothespins to make snowflakes. The original pin is for glittered snowflakes. I didn’t glitter mine but I think for next year, I’m going to paint them white. Also, I put them on cardboard to dry and the glue stuck to some of the cardboard (you can see it in the very center of the snowflake). Lesson learned. 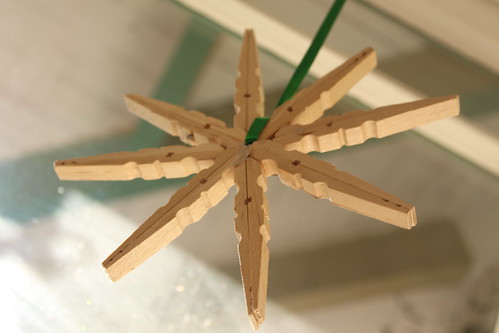 I attempted to create this star made from the metal coils from the clothespins but it just looks like a bunch of coils joined together. Fail.

I picked up some wooden letters at Walmart for a “NOEL” display, inspired by this original pin. We already had red, green and white paint that we used to paint the house, which was convenient. My candy-cane striped E even came out relatively successful. 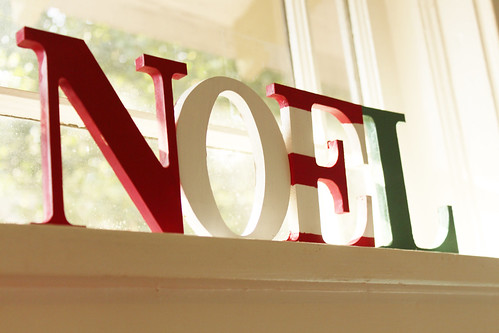 My less successful efforts were the twine ball and tree. 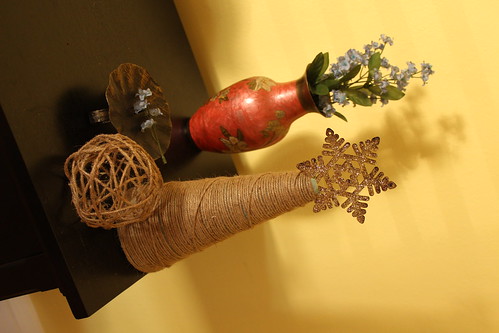 I made three twine balls using balloons and glue. One came out decent, yet slightly misshapen. For some reason, the balloons lost air quickly, before the glue dried, so some areas sunk in. This was also pretty messy. I had glue all over my hands — though I’m not sure if that’s the nature of the project, or it was just me.

I used cone-shaped floral foam for the trees because I couldn’t find cardboard ones. One came out okay, the other one started to shed so much that I got fed up with it and threw it out. I used a glitter star that came in a set of ornaments I got at Target to top the tree and cover some of the green foam that is still exposed. Not perfect, but these two made the cut and sit on our foyer table.

The glitter stars are also hanging from the built-in bookcases. 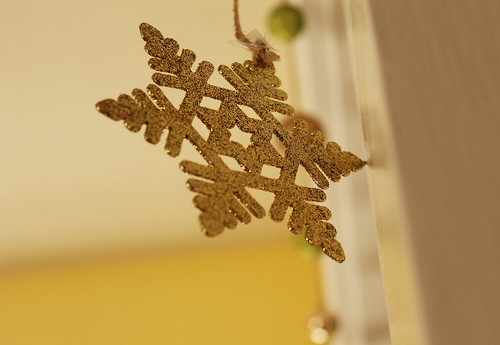 For the rest of our decorations, I used a few things I’ve collected over the years. 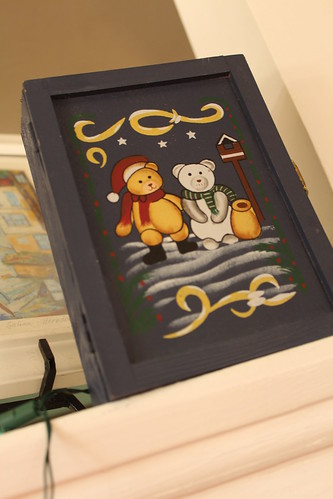 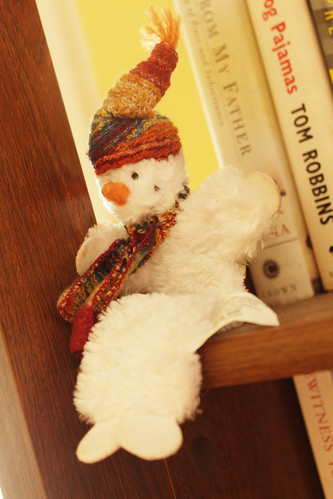 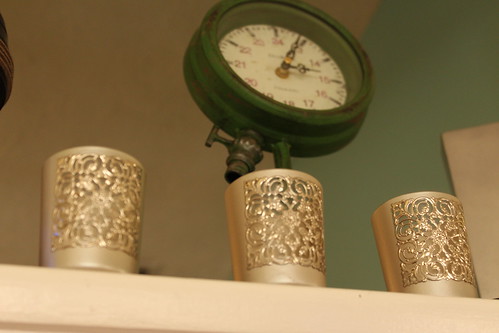 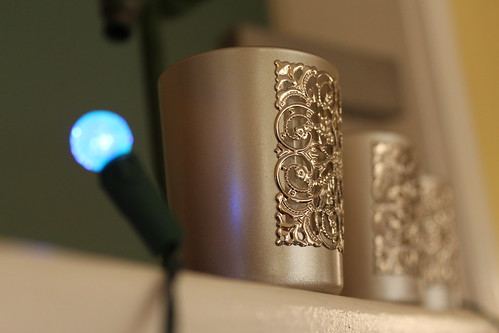 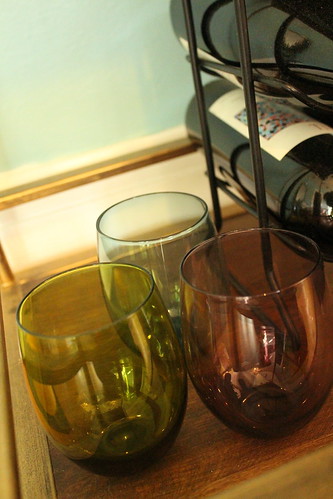 These colorful wine glasses are festive.

Next year, I may stick to more pre-made decorations. There are a few more Pinterest projects I want to try out though, like these crocheted ornaments, these cute twine-covered bottles (I really don’t know what it is with all the twine) and adorable mini-wreaths made from yarn and shower curtain rings.

What homemade holiday decoration projects have you had success (or complete failure) with?