This is a post on landscaping, but I am going to preface it by saying I am the most novice of novice landscapers. I grew up in a very urban area. We had no front yard and a tiny, tiny backyard. The side of our house was an alleyway.

When bought our house, we now had a front yard, side yards, backyards. New territory for me! We started small — mostly by adding flowers and such to the planters built-into the front porch. Joel trimmed the shrubs at one point. Early on we did plant a tiny tree in the front yard. It’s now ever so slightly bigger. But generally, it was meh. Weeds were overtaking the palm plant on the side of the house. Weeds were growing furiously under the bushes.

One of the listing photos of our house

Something needed to be done to breath life into the front yard. When Joel suggested mulch, it was like the light shone down — of course we should mulch around the house. Our house, like many old houses, does not have gutters. The water pools off the roof in certain areas and makes it muddy and hard for grass to grow. So off to Home Depot we went (or maybe it was Lowes? I can’t keep track at this point). 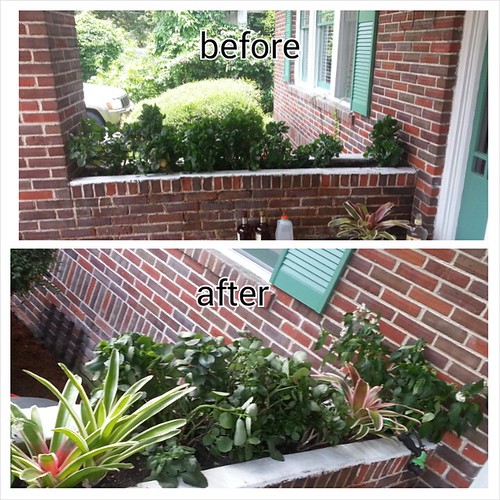 We bought some new plants for one section of planters on the porch, a ton of mulch and some flowers to put around the bigger tree in the front yard. First, we grossly underestimated the amount of mulch we needed, so Joel had to make a second trip to pick up more in the middle of our landscaping adventure. He mulched around the rose, the tiny tree and half of the new flower bed we created under the large tree before running out of our first load.

One of my main goals of our first day of landscaping — which was also the most oppressively hot day ever — was to trim the bigger tree in the front yard. It was overgrown and really starting to irk me every time I saw it. So I got out the hedge cutters and went to work. I soon learned my arms are not cut out for hedge-cutting. I could barely lift the things at first, but persevered on. I was dedicated to the cause. The outcome wasn’t exactly how I imagined — five feet barely four inches me + six foot ladder = I could only reach so high — but it looked sooooooo much better afterwards. Add in the new mulch and flowerbed and it looks damn good if I don’t say so myself. 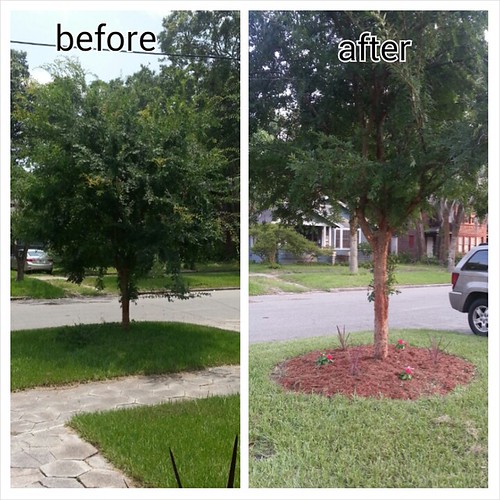 We then mulched under one bush before running out yet again. Enough for one day. 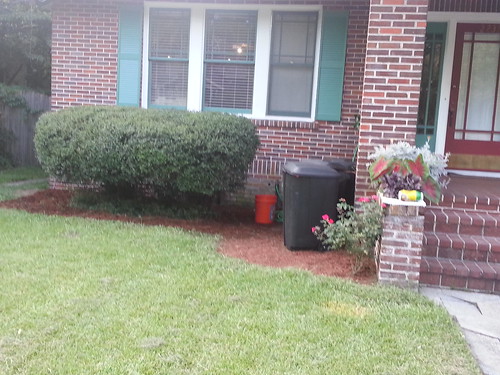 Our second day of mulching covered the second bush in front of our house and around the side of the front porch. Pulling up all those weeds was some serious arm work. I’m pretty sure I have slightly defined biceps because of it (compared to the not-at-all defined biceps I previously had). Some of the weeds were basically bushes themselves by the time I ripped them up! But away went the weeds, and in went the mulch. And an Azalea bush. And some other plants. 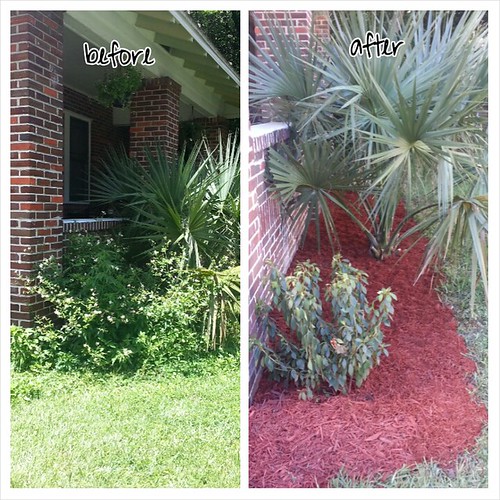 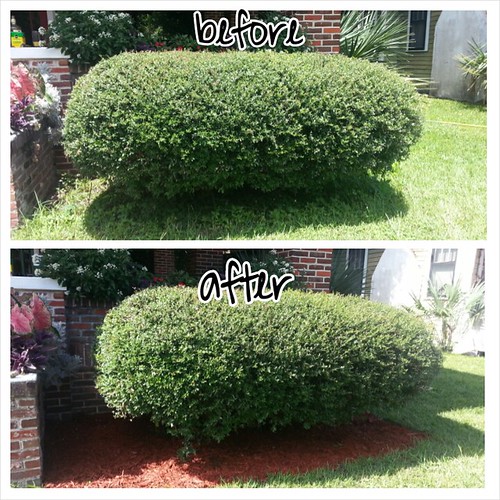 Oh, and on our second day, we also did not buy enough mulch. Back AGAIN Joel went to buy more. Mulch really goes fast.

I wandered Home Depot for a good 20 minutes, looking at all the plants. I wanted azaleas, but the azalea section was completely empty. Except for one I found randomly leaning against a pole in another area. I’m not even sure if its a real azalea? It was purchased and planted nonetheless. I also picked up some other pretty vine-like plants, which went in on the side of the porch. Don’t ask me what they are because I don’t know, but they look very pretty. The palm plant also looks so much healthier now that its not being choked by weeds. 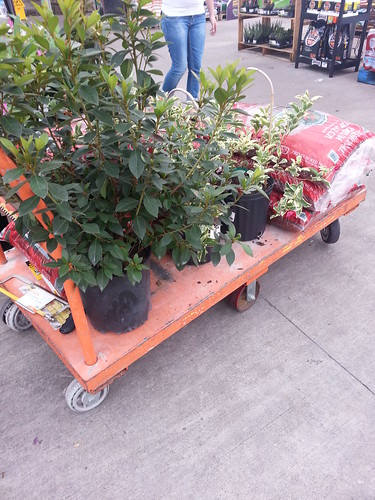 So the front yard is basically done now! I want to plant another azalea on the left side of the house (next to the other bush) but there’s no rush on that (mostly because I don’t think they’re selling azaleas right now). I’m really satisfied at how the mulch looks — it solves our water-running-off-the-roof issue and generally gives the yard a cleaner look. Plus the red mulch complements the red brick of our house nicely.

Joel says our house looks so nice now that someone should paint it (any takers?). 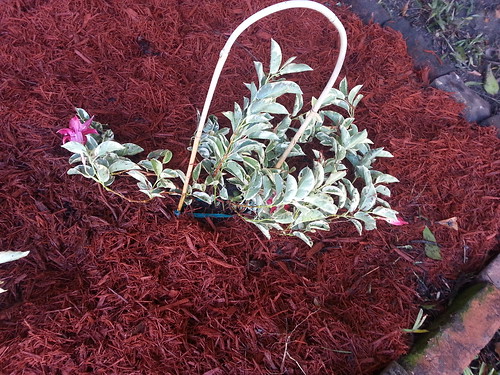 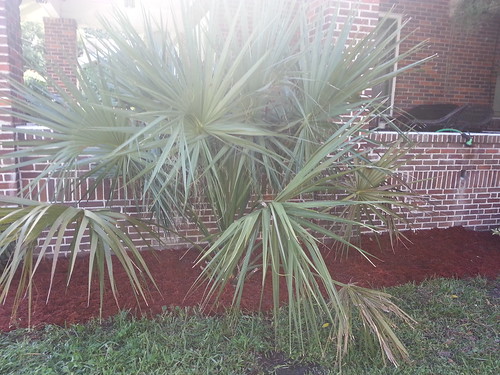 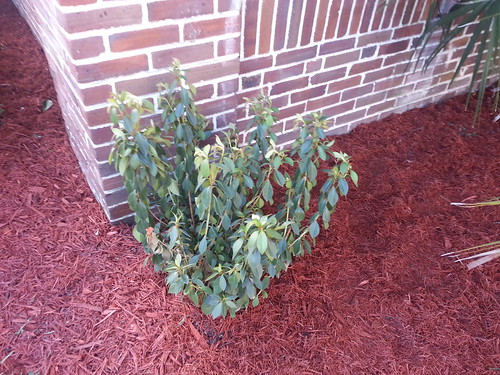