Utah’s first national park is probably its most spectacular — and that’s no easy feat for a state that boasts a whopping five, including the Bryce hoodoos and the famous arches of, of course, Arches.

And we only got a small glimpse of its wonder. Zion National Park is definitely a park worthy of a return visit — I think I hear the Subway, the Narrows and maybe even Angel’s Landing calling my name.

We bookended our Wild West road trip with the two best stops. Two nights in Yellowstone and two in Springdale, just outside of Zion. Our first night, after driving around harrowing hairpin turns on the Mount Carmel Highway in torrential rain (my shoulders hurt from grabbing the “oh sh*t” bar in our Jeep so hard), we settled into our hotel and headed, where else, but to the local brewery.

We stayed at the Bumbleberry Inn, which included free breakfast at Wildcat Willies each morning. We fueled up before catching the first shuttle of the day to the park entrance. After walking into the park (with our handy dandy America the Beautiful pass), we caught a second shuttle that took us to the Weeping Rock stop. During a good part of the year, you’re not allowed to drive in Zion. We found the shuttles to be efficient and on time, and an easy way to navigate through the park.

Zion Canyon was created by the Virgin River, which looks pretty tame at first glance. But over millions of years, it carved through the sandstone, creating steep walls and a magnificent, colorful landscape. Although quiet and thin, it can rage during flash floods — which can come downstream very quick and, sadly, kill people each year in the park. 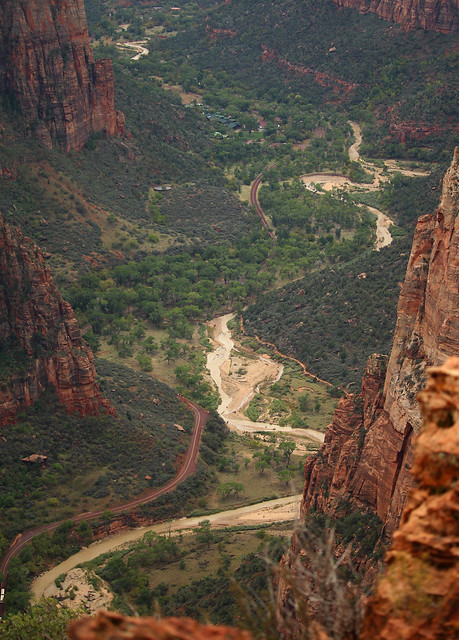 Angel’s Landing is one of the most famous hikes in the world, but was unfortunately closed while we were there, to allow crews to help maintain the trail. I was only slightly disappointed though, because neither Joel nor I are fans of heights. And the six-mile round-trip Angel’s Landing hike apparently features steep drop-offs and a section where you are walking along a thin strip of rock, nothing but a certain death below you on either side and a chain in the middle to cling on to.

We opted for the Observation Point trail instead. This hike takes you to a lookout high above Angel’s Landing. The view might be slightly less impressive, but trust me, once we got to the top, we were anything but disappointed. Observation Point is no joke though — this eight-mile round trip hike is steep. In four miles, you gain 2,100+ feet — more than Angel Landing’s still impressive 1,400+ gain. I saw some ambitious people heading up that, to be honest, I wasn’t sure were going to make it to the top. 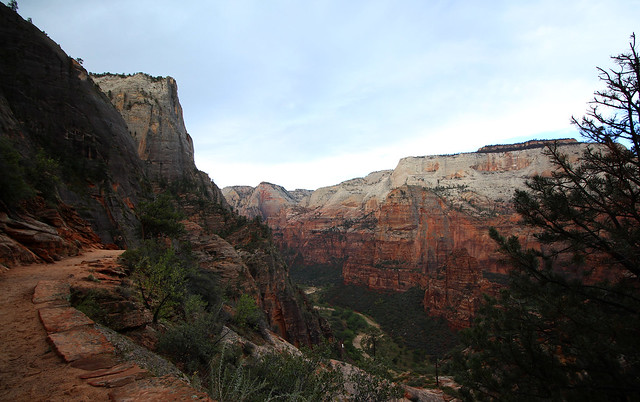 The first part is actually pretty boring — switchback after never-ending switchback. Switchbacks are necessary evils but can get old. But hold on! Just when you think you’d rather head back down than do another switchback, you’re rewarded with an entrance into Echo Canyon. I’m not going to lie — I love a good slot canyon. And to think, a year ago I didn’t even know what a slot canyon was. 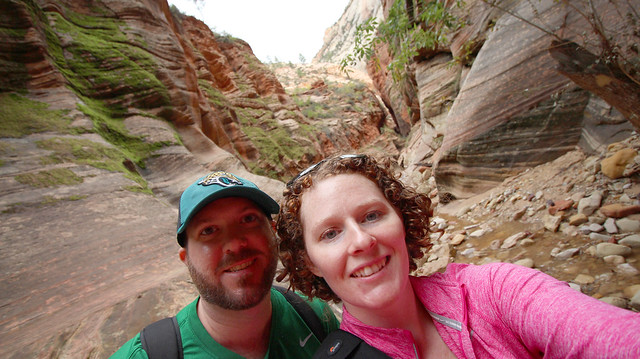 After rushing up the switchbacks, we slowed down in Echo Canyon to enjoy our surroundings. And take a selfie. 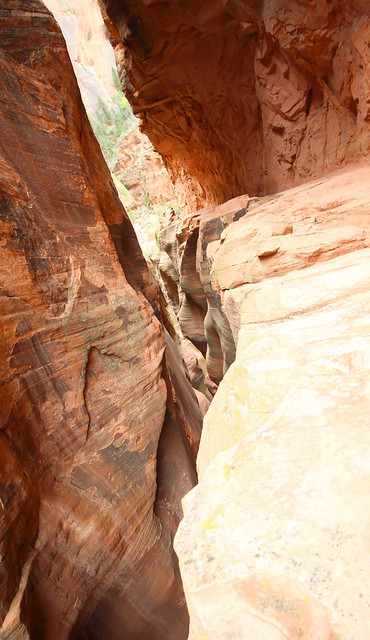 Since it had rained the night before, there was a steady flow of water throughout the canyon. Which gives you a good idea of how these narrow wonders were made. We rounded out of Echo Canyon, into an opening, as we continued our ascent. 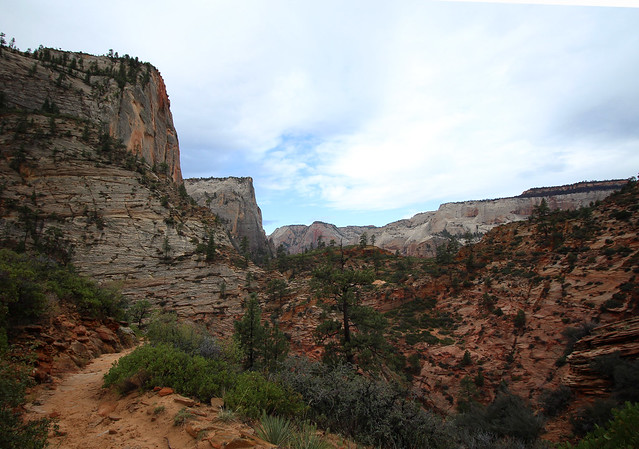 The trail seemed to meander through this area for a long time. It felt like we were going up for a long time. And then would be on flat ground for about 10 seconds before going up again. But then came a glorious reprieve — the last quarter or half a mile or so (I can’t be sure, my legs and lungs were pretty spent at that point) was flat! We basically wandered along the top of the canyon until we came to: the prize at the bottom of the box! Or in this case, at the top of a long, steep hike. 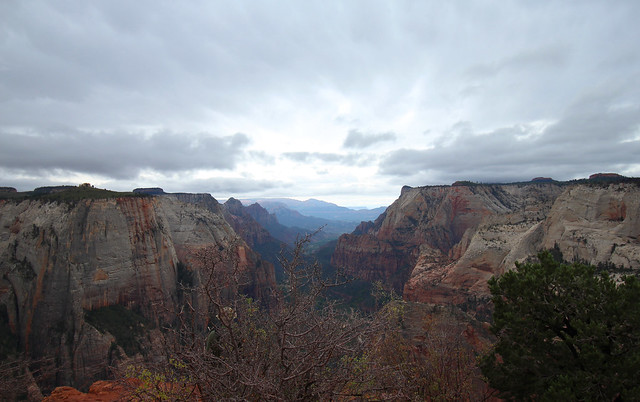 To be honest, I probably would have walked four MORE miles for this view.

All I could think was, I can see for miles and miles. 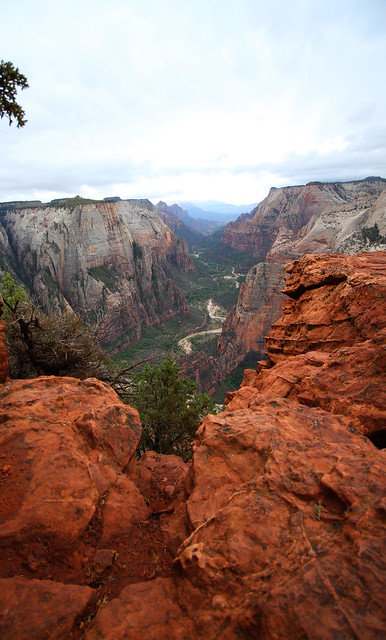 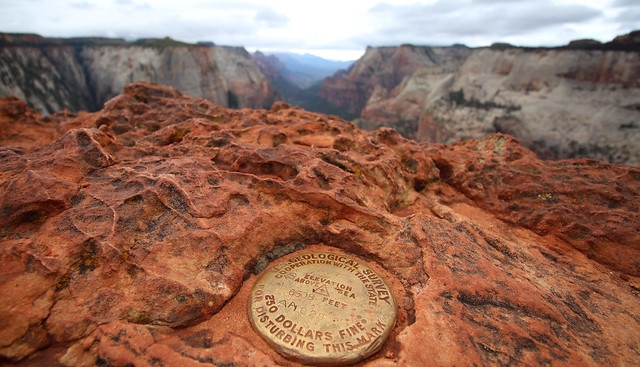 We did what we do best on our hikes — inhaled lunch once we reached our destination. And enjoyed the view. The sky had darkened on our way up, but if anything it made for a more dramatic view. Zion Canyon is a pretty lady in any light. 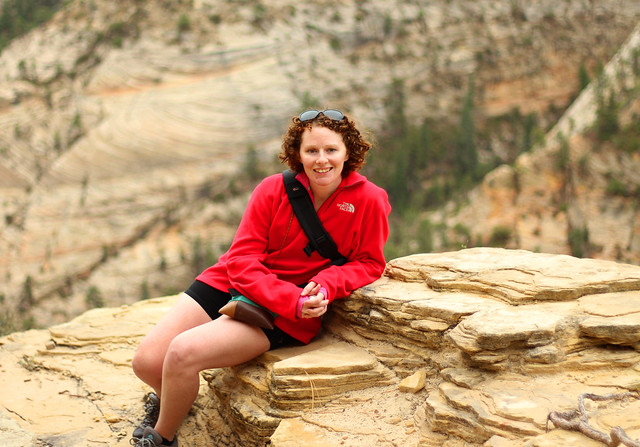 The hike down was much more chill, although a bit taxing on the knees. 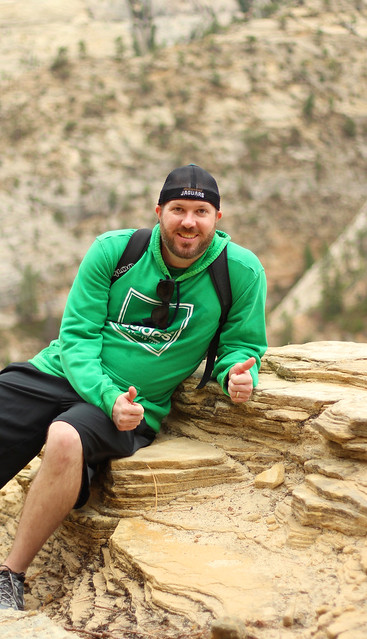 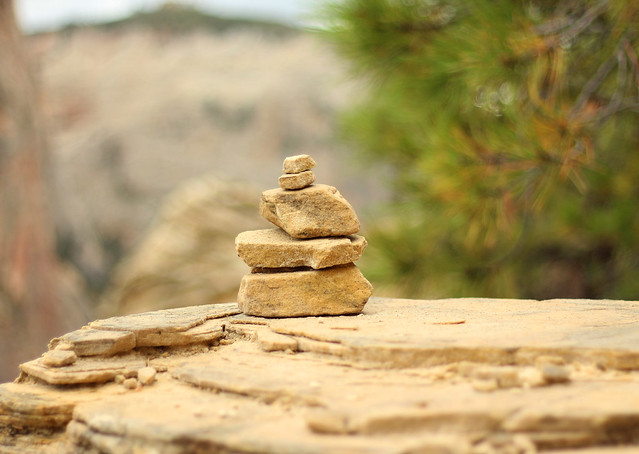 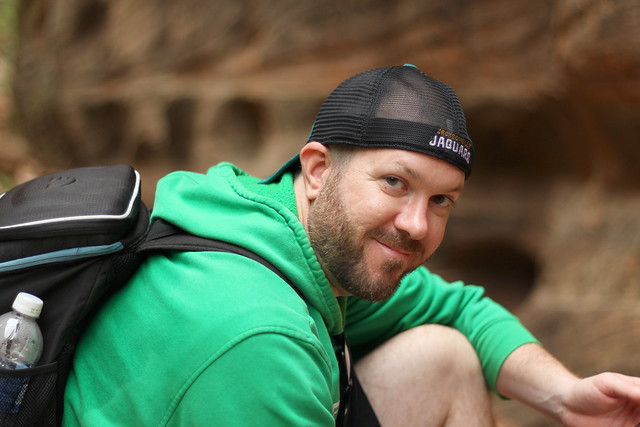 A quick stop in Echo Canyon on our way back through.

By the time we back to the bottom of the trail and onto the shuttle, there was a slight drizzle. I wasn’t going to leave the park without at least glimpsing the Narrows, so after our eight-mile trek, I dragged Joel another mile (there AND back) on the Riverside Walk from the Temple of Sinawava to the mouth of the Narrows. 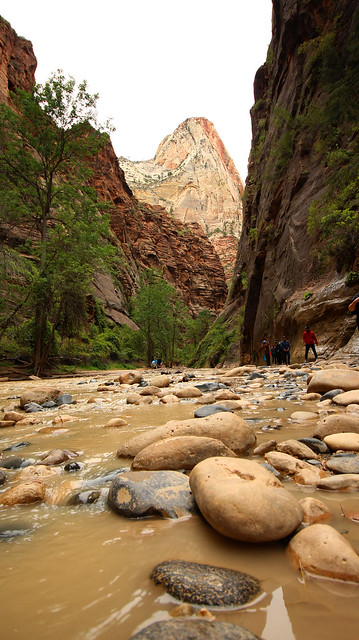 I had hoped to at least wade a little ways in, but because of the impending storms, plus our very tired legs and tired bodies (I was on the cusp of a cold) and the cold air AND water, the above picture is as close as we got. So we headed back to our hotel mid-afternoon. I can’t really complain though, because we sat and chilled on our hotel balcony with this view: 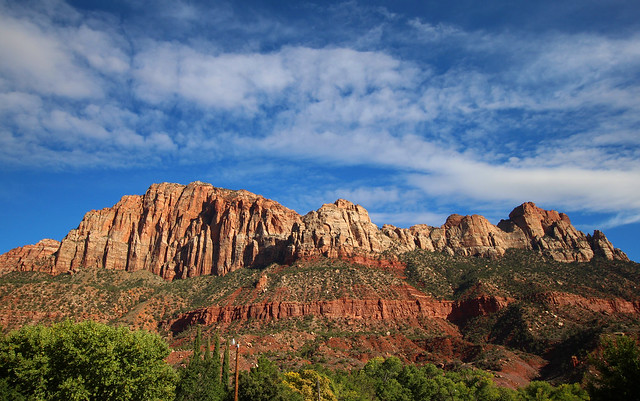 And that’s it for our Wild West trip. The next day we drove back to Salt Lake City and caught a flight back home to Jacksonville. It was a whirlwind week — we fit WAY too much into our eight-day adventure. But it was all worth seeing, and I dare to say I’d do it again if I had to redo this trip. Luckily my husband is a go with the flow type of guy, so he’s typically game for whatever crazy timeline or activity I have up my sleeve (as long as he doesn’t have to plan it — good thing I love to plan and he loves to just go along #matchmadeinheaven).

I never thought I’d be a road trip fan, but when you’re driving through incredibly gorgeous landscapes, it’s hard NOT to have fun. Throw in some good music and I feel like I can drive forever. Until next time…