And the adventures do abound in this city that sits on the Colorado River, only a few miles from vast canyon lands and wondrous arches, sandstone towers and other mystical formations. Mountain biking. Rock climbing. Cliff jumping. Rafting and kayaking. 4x4ing in your Jeep. Pick your sport.

After passing through what seemed like endless dusty red desert heading into Eastern Utah, we wound our way around one too many hairpin turns down a desolate road that led into the Island in the Sky section of Canyonlands National Park. We didn’t have a ton of time in Canyonlands, but couldn’t pass it up being so close by so I put together an itinerary of a few top spots. A two-hour tour, if you will.

Island in the Sky is a mesa that sits up 1,000 feet over the park’s famous canyons.

If you’ve got a Jeep (an off-roading kind, not a Compass like our rental car) you can drive down into Shafer Canyon, which is a short drive from the visitor’s center. We opted to take the short walk to look down into the vast canyon and enjoy the pretty Utah Junipers that somehow thrive in this arid, dusty climate. 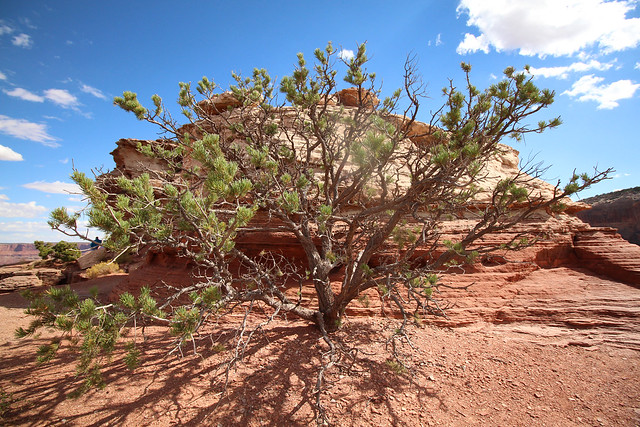 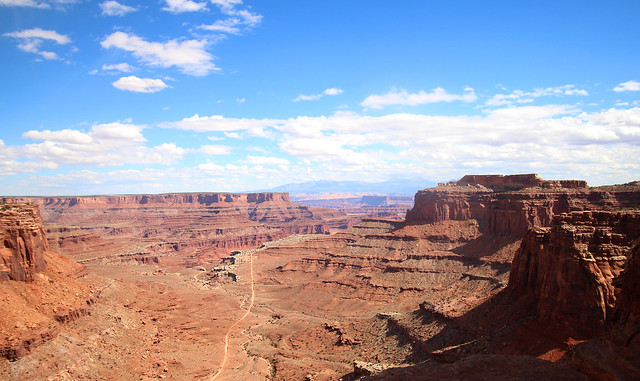 We spent the longest at this popular spot. The half-a-mile loop is super easy to walk and the views spectacular — you don’t just get an arch, but a frame for Washer Woman Arch, Monster Tower, the gorgeous La Sal Mountains in the distance and the miles of steep canyon walls. 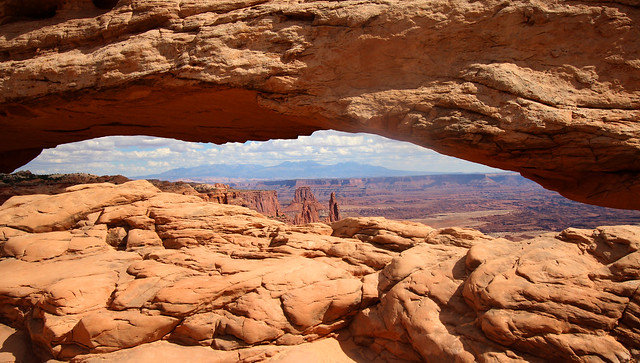 This shot gives you an idea of all the aforementioned features. 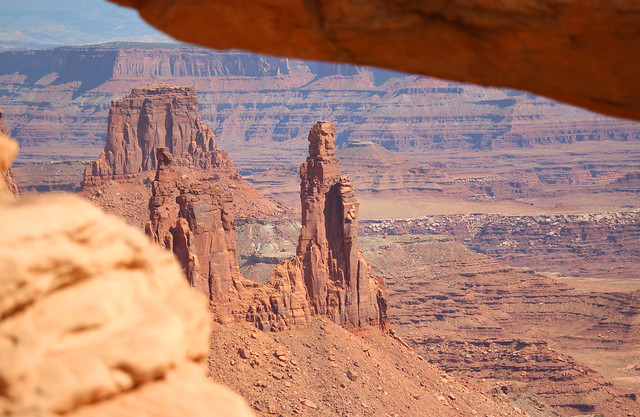 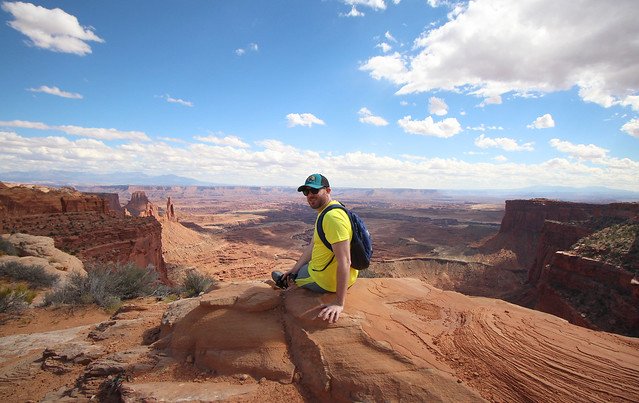 It’s easy to feel like a speck of dust when you’re surrounded by this.

The Colorado gets all the attention but it’s not the only canyon-carving river in the park — the Green River meanders down from the north and meets up with the Colorado River, but not before eroding away millions of layers to create its own fantastic landscape. 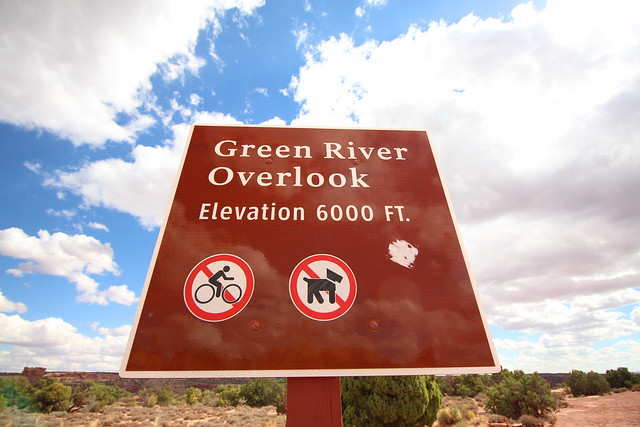 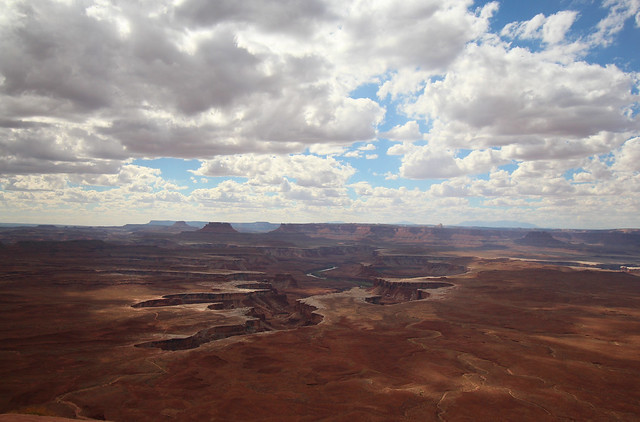 The sky was a true ham, stealing the thunder from the red canyons with its baby blue hue and cotton ball clouds.

The dry desert air and 80-degree temperatures left us dehydrated and hungry, so we grabbed sandwiches at a small shop in Moab before hitting the area’s second park: Arches National Park. Unlike Canyonlands, Arches was much easier to access, but on the flip side it was also much more crowded. It didn’t help that we were there on a weekend but we were able to find parking at each stop and did our best to ignore annoying tourists and their selfie sticks.

We set out — or up, as you have to take yet another winding road that is as vertical as it is circuitous — to check out as many viewpoints as we could with a few short hikes and one more challenging one thrown in. This was our four-hour tour, as we had a date with the sunset at Delicate Arch.

This ain’t no Manhattan skyline. Park Avenue is spectacular wall of sandstone spires that rises straight up from the high desert floor. We ate lunch at the viewpoint. Our sandwiches sucked. The view did not. 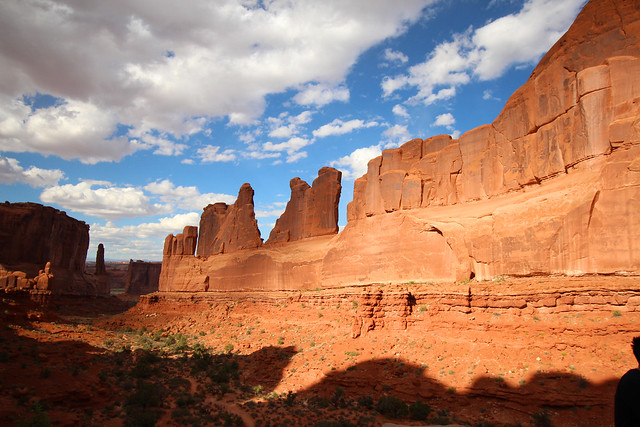 The afternoon sun put on quite the show — the cumulus clouds cast dramatic dark shadows across the formation.

We got a great view of this huge mass from the Courthouse Towers Viewpoint. While Canyonlands’ biggest sell was the expansive views, Arches was living large off of funky formations with fun names. 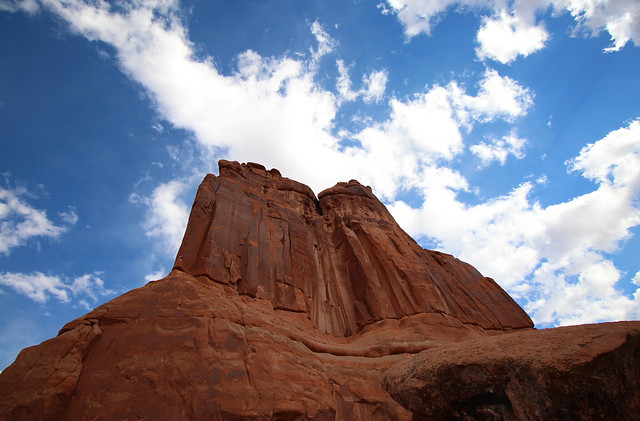 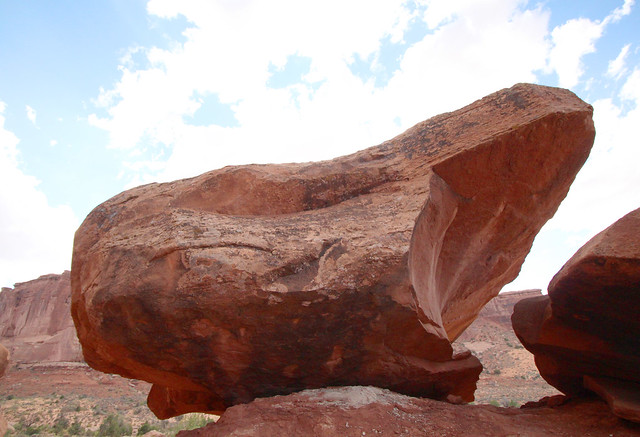 This one’s pretty self explanatory. Also, one of Joel’s favorites, sheerly for the endless silly-photo possibilities. 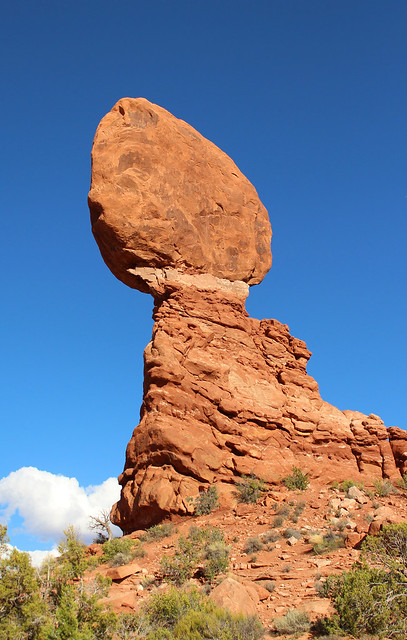 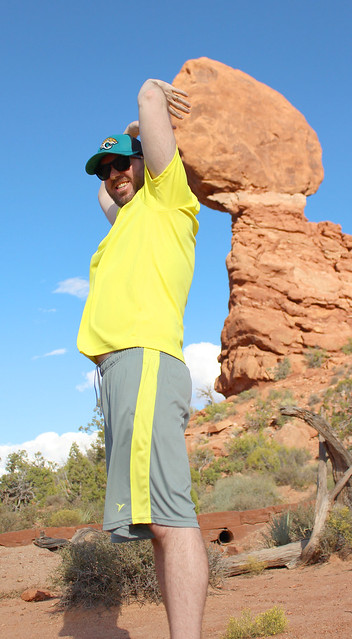 We went here with the intention of seeing all of the arches — Turret, North Window, South Window — but ended up getting distracted by Double Arch. It’s huge and beautiful and, most importantly, shaded. In the afternoon heat it was a welcome reprieve from the hot sun to sit under the arch for a bit. 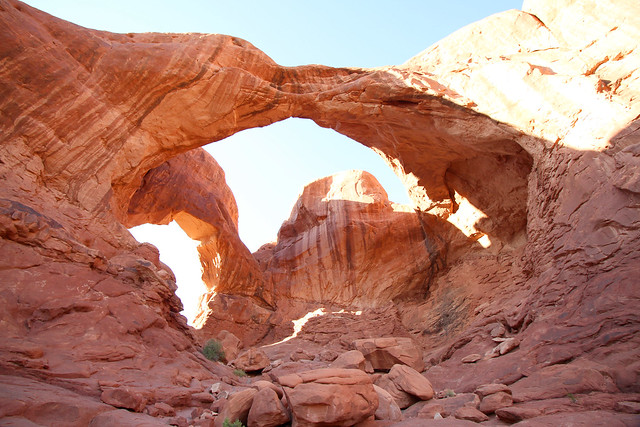 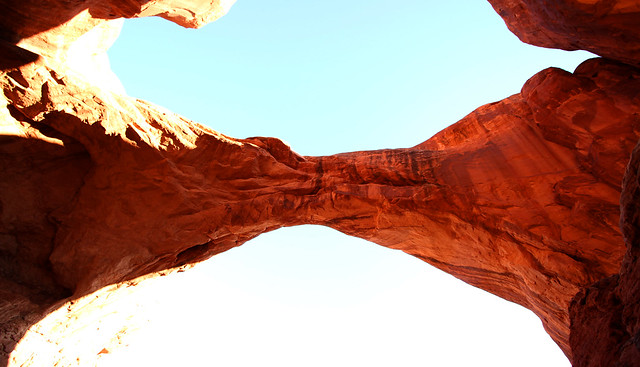 Double Arch is a pothole arch, meaning it was created by water erosion from above, not from the side like most other arches. 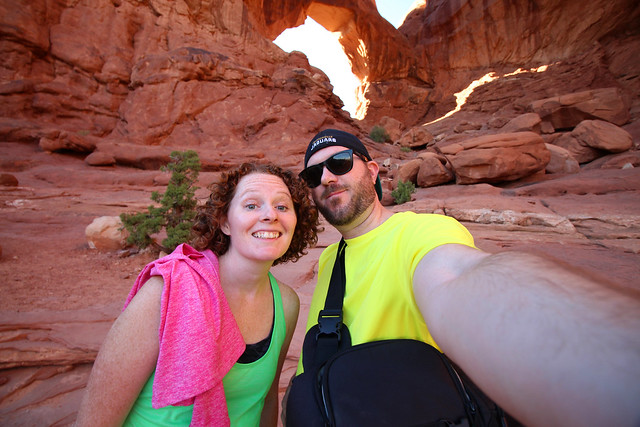 This is my “don’t blink” face.

This beauty is easily the most recognizable feature of Arches. It’s on Utah license plates and the Olympic torch passed under it in 2002. Delicate Arch is a 65-foot, freestanding arch that is, as you may have imagined, rather delicate due to its circumstances. You also have to work to get to it — a short but relatively strenuous 1.5 mile hike mostly up slick red rock. There’s plenty of signs at the trail head to remind you to drink water on this hike or you’ll die. We hiked far longer and more strenuous trails on our wild west trip but this one was no easy feat after combining a day of sightseeing; the hot, dry desert air; and the steep nature of the trail.

True story: we saw an older gentleman pushing a double stroller on the trail heading in the opposite direction as we ascended the trail. We were initially quite impressed but the farther we went, the less plausible it seemed that he was able to do the whole trail. Especially since the last tenth of a mile or so is basically a rock ledge. 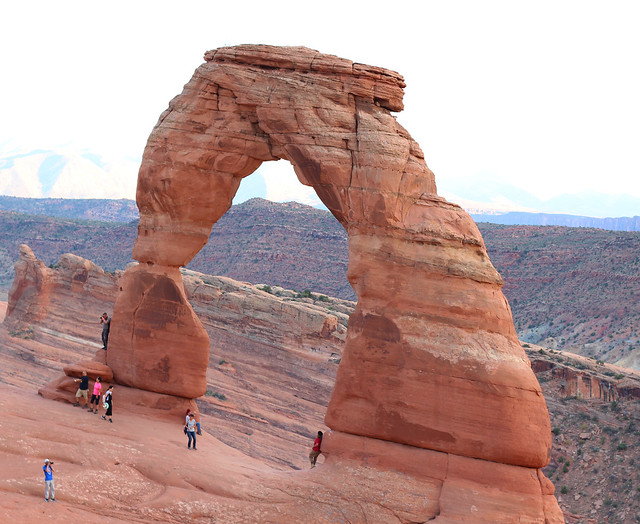 The arch basically sits on the upper ledge of a bowl. We stationed ourselves directly across on a relatively flat ledge. Us, and a few hundred friends. There was no shortage of tourists who took turns running to pose at the base of the arch. We chose to enjoy it from afar. 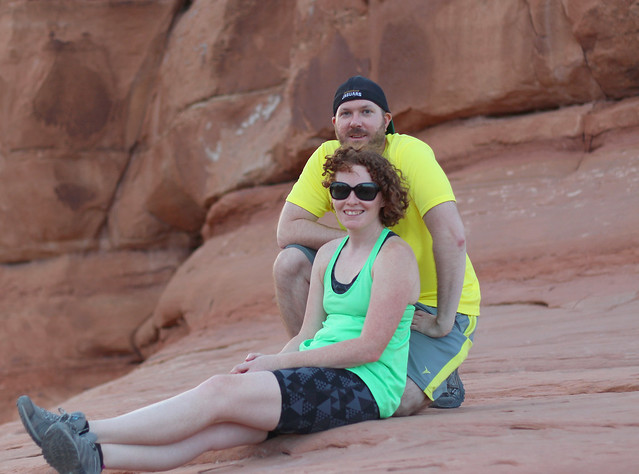 Thank you to the strange European guy with the IPA who snapped this picture of us. 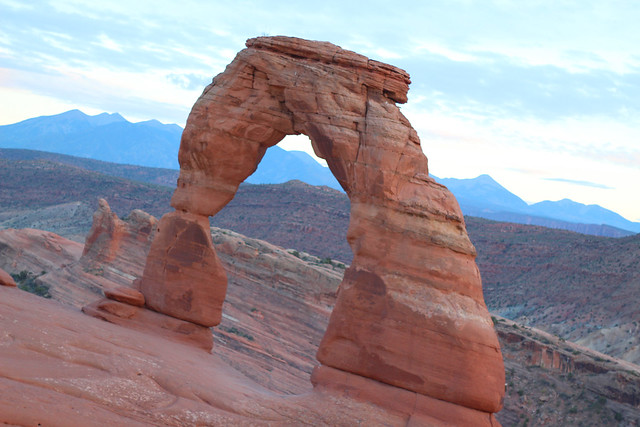 Finally some guy yelled “Move already!” And people did for the most part. While we weren’t facing the sun, we did get to see the light play off the distant La Sal Mountains. 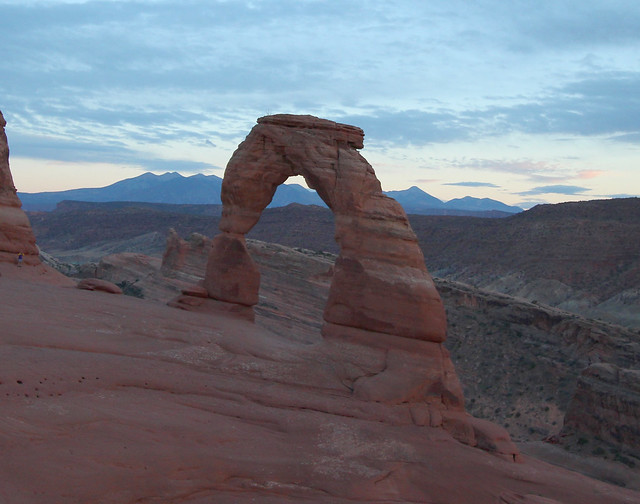 Delicate Arch was a beautiful last stop of the day. We enjoyed the view until the sun had mostly faded and then stumbled our way through the dark back to our car.

We headed into Moab for the night, exhausted and glad for the cooler night temperatures. We capped off the night with some mediocre food and delicious beer from Moab Brewery.