You can usually smell it before you see it. When it finally appears, the mountains rising up from its many shores catch your eye more than the still, bluish-green waters of the largest lake between the Pacific and the Great Lakes. The water reflects the sky so well that as your eye attempts to find the end of the horizon, its near impossible to tell where one ends and the other begins. 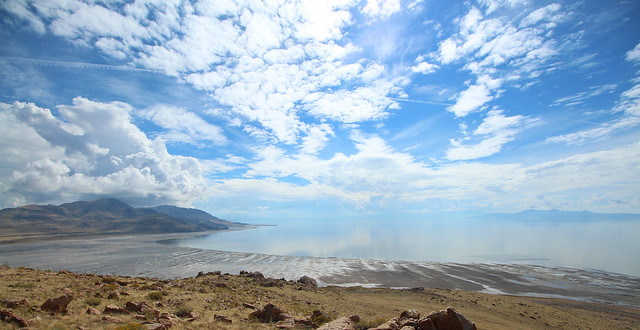 The Great Salt Lake is one of the biggest attractions in Northern Utah for good reason — it’s a unique, beautiful place and definitely worth a stop if you’re in the area.

To get a closer look (and feel) of the largest saltwater lake in the Western Hemisphere, we visited Antelope Island State Park. Antelope Island is the largest island in the lake, home to Frary Peak (6,500 ft+) and wild, roaming animals like bison and antelope.

The Great Salt Lake is a remnant of Lake Bonneville, a prehistoric lake that covered more than 20,000 square miles during the Ice Age. Basically, slightly smaller than West Virginia. Another popular Utah feature, the Bonneville Salt Flats, are also a remnant of the lake. 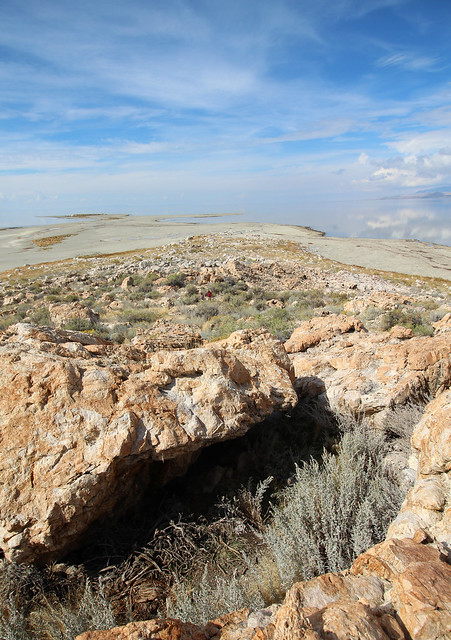 We started off with a picnic and a short hike out to Ladyfinger Point. It’s a quick hike over a rocky area with a lovely view at the end. It was a beautiful day with wide, blue skies and plenty of sunshine. The clouds put on quite the show throughout the day. 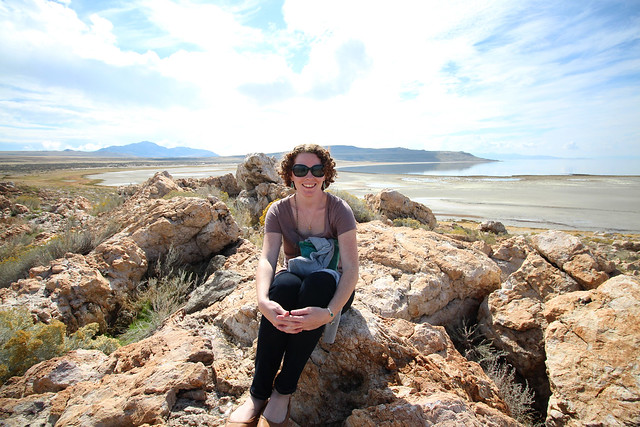 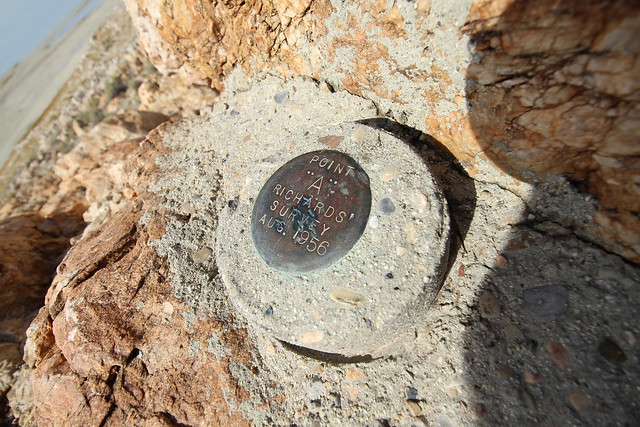 To get a better view of the lake, we headed up to Buffalo Point. A little less than a half mile each way, it was a quick but steep trek up. On the way, we stopped to enjoy the beautiful yellow flowers that dotted the hillside. 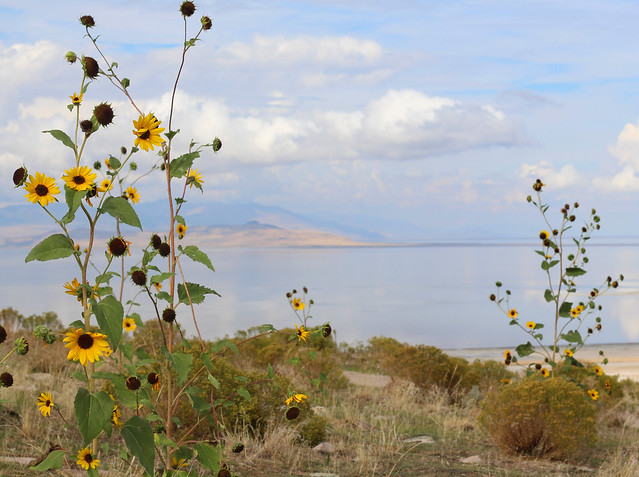 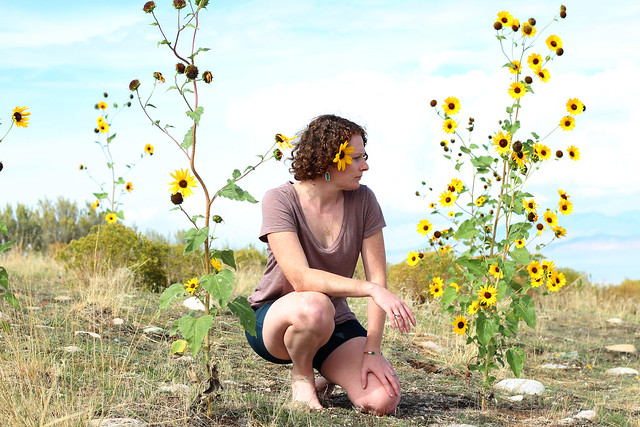 From the top of Buffalo Point, Frary Peak was visible across a little inlet, where the water streaked the beach. It really was the most lovely of days. 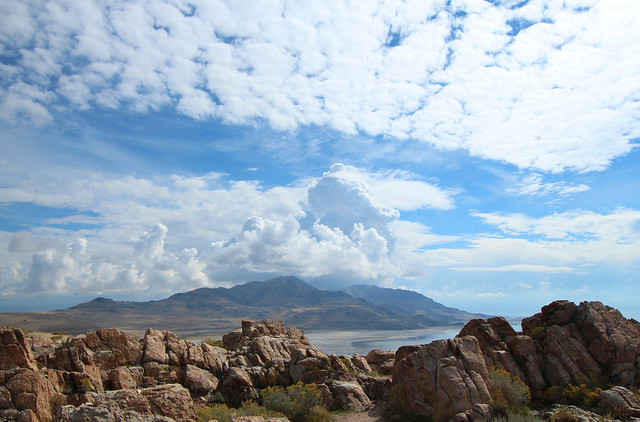 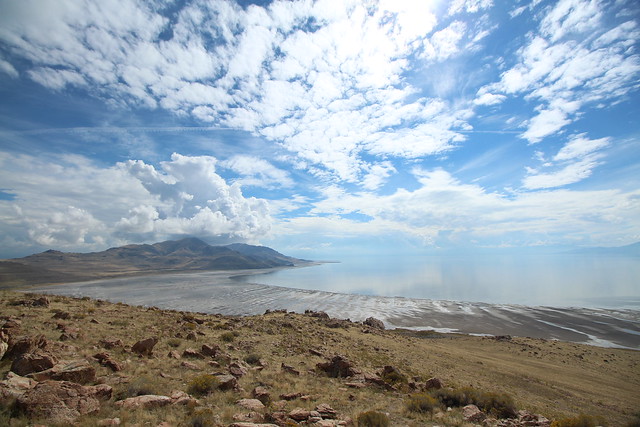 Before heading out, we walked across a large expanse of beach to get up close and personal with the lake. It was a little smelly and, big surprise, super salty. Apparently it is mostly inhabited by one of the few creatures that can handle such a high salinity, brine shrimp — tiny little shrimp that have survived and changed very little since the Triassic period. Between the brine shrimp and algae washing up and decomposing on the beach and brine flies that swoop in during the spring and summer months, the smell on the beach wasn’t particularly pleasant. 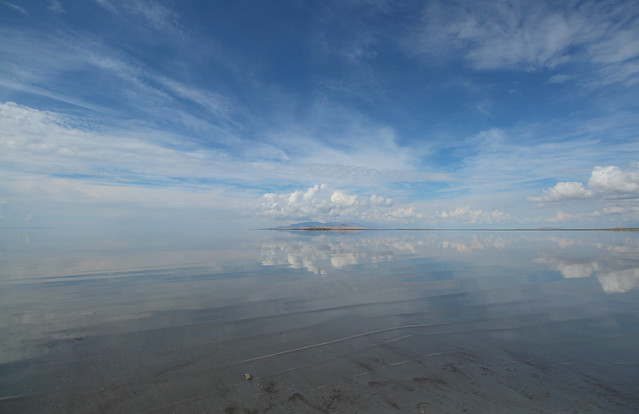 This definitely wasn’t a sunbathe-and-take-a-dip type of beach. It was pretty tranquil though, looking out at the mostly-still water making small ripples as it lightly lapped the shoreline.

The lake truly is “great” in size. At 1,700 miles, we only saw a very small portion of it the afternoon we spent there. My only disappointment was that we didn’t actually see any antelopes on Antelope Island. 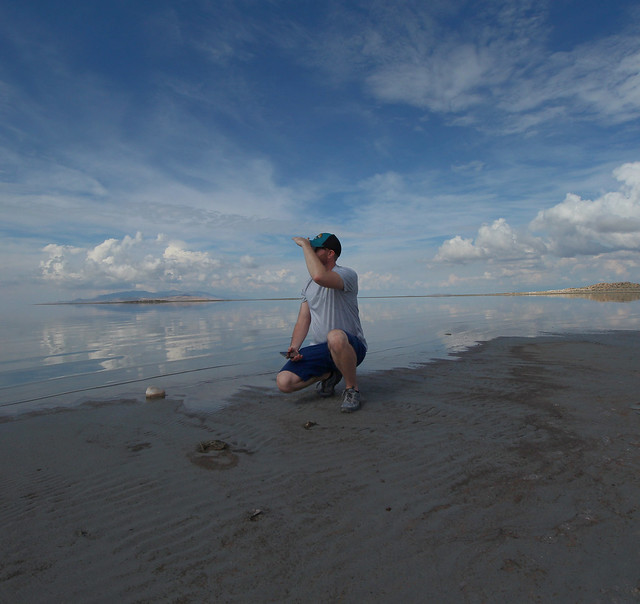 2 thoughts on “The salty life: The Great Salt Lake”