America’s first national park may just be its best — Yellowstone National Park is a truly special place. It’s also in the middle of NOWHERE.

The first stop on our Wild West road trip, we drove six hours from Salt Lake City (time includes a Target run and several aimless attempts to find gas in Nowhere, Idaho) in a race against the sun to get to our resting place for the night, the Old Faithful Lodge, before the sun went down and the likelihood of hitting an unsuspecting animal in the pitch black with our rental car went up. We pulled into the parking lot at 7:15, just as the sun disappeared beyond the horizon, and only had to navigate our way to dinner that night.

Yellowstone is known for its geysers — the greatest concentration in the world! — but is much, much more.

Since they’re the best known feature, we’ll start with them. The park has several geyser basins; we visited the three most popular: Upper, Midway and West Thumb.

Our first stop was the West Thumb Geyser Basin, located on the shore of the picturesque Yellowstone Lake. It was a cloudy, cool morning on the lake, which covers 136 square miles and holds the title of largest freshwater lake above 7,000 feet. 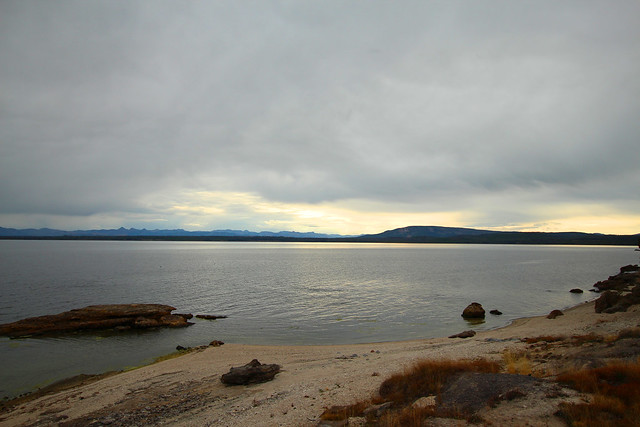 The West Thumb basin’s numerous geysers, springs, pots and pools both set the mood, with rising steam, and brightened it — with rich blues, greens and oranges. 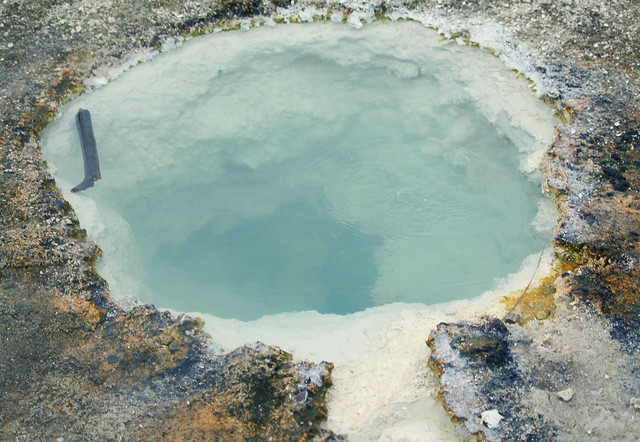 I forget the name of this one. 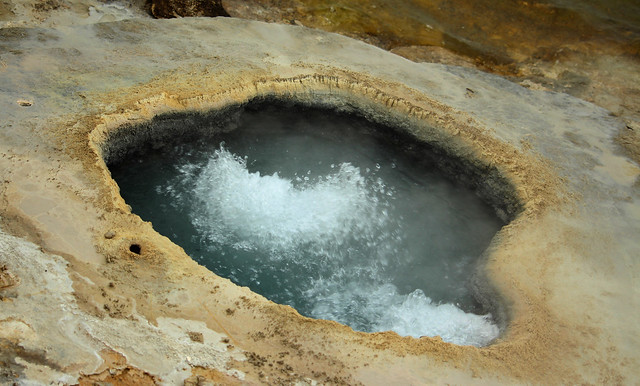 Lakeshore Geyser — the water was boiling! 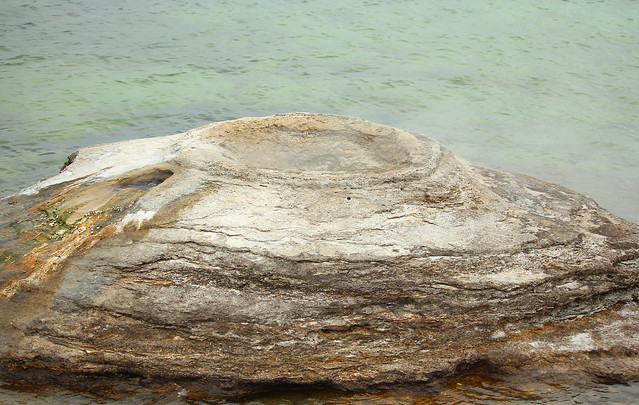 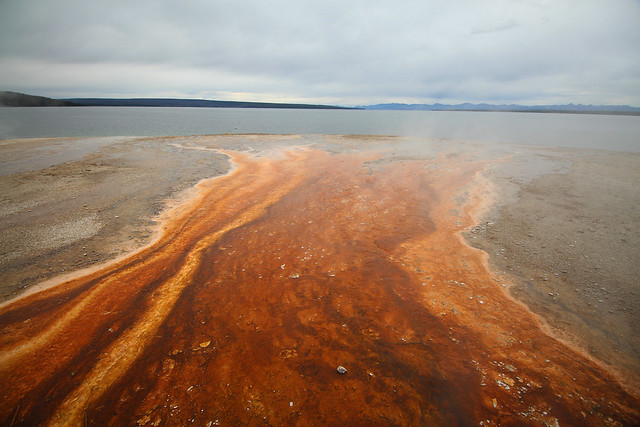 Midway Geyser Basin is a small basin on the Firehole River most famous for Excelsior Geyser, which flows into the river, and the brightly colored Grand Prismatic Spring. Unfortunately the spring, which I was excited to see, was not really visible due to steam. It was also incredibly crowded there, which was equally distracting, annoying and dangerous — I almost got knocked off the boardwalk due to a rude tourist who wasn’t paying attention to what she was doing. 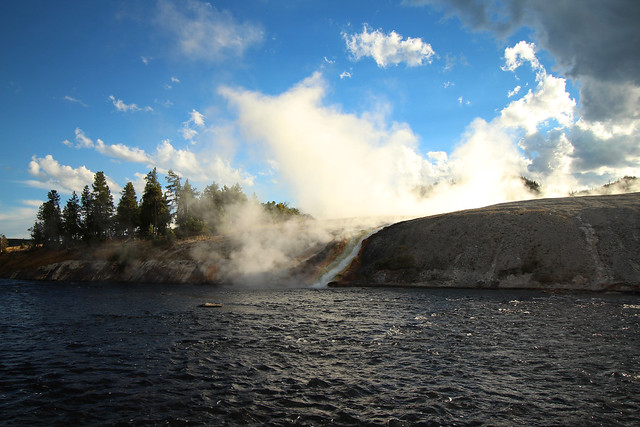 Excelsior Geyser flowing into the river. 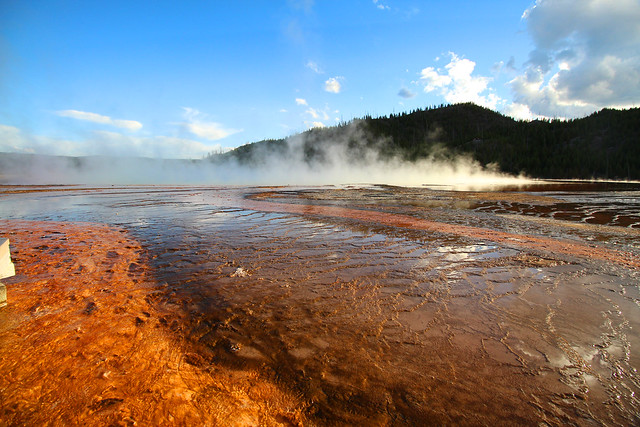 Then of course there’s the most famous geyser of them all — Old Faithful. We were staying right outside of the reliable geyser and managed to catch it erupt — it goes off every 90 minutes or so — on our last evening there, as the sun went down. 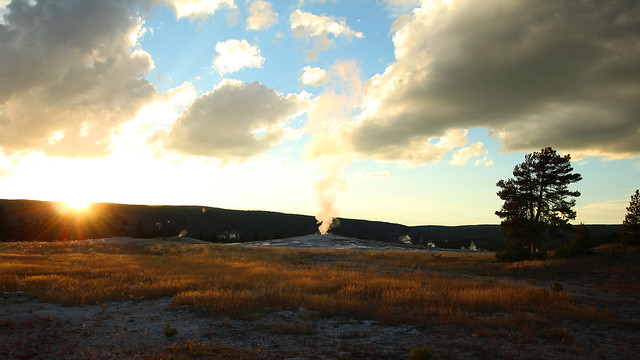 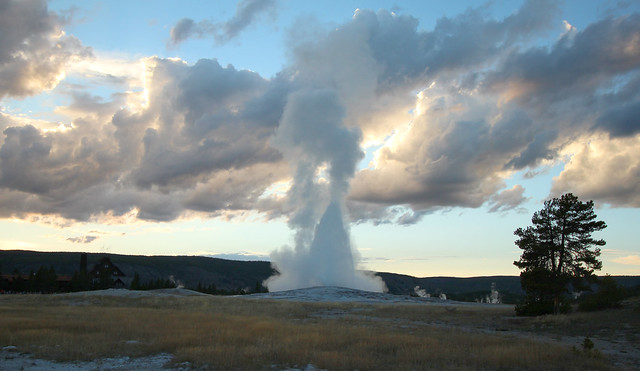 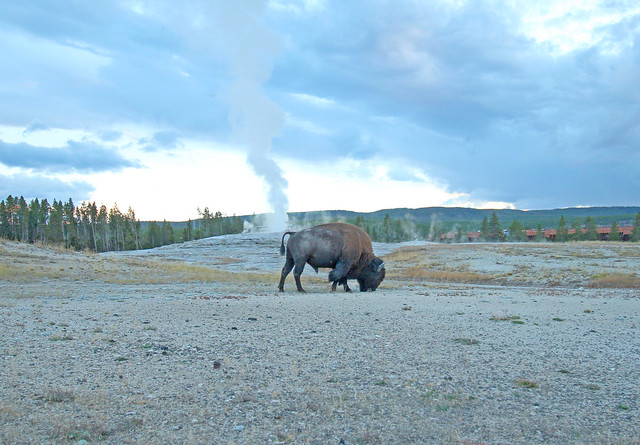 Everyone knows the Grand Canyon, one of the world’s seven natural wonders carved through a red rock desert by the mighty Colorado River. But I imagine many less people are aware of the Grand Canyon of the Yellowstone, a much smaller but majestic canyon whittled through a dense forest and colored yellow by iron. 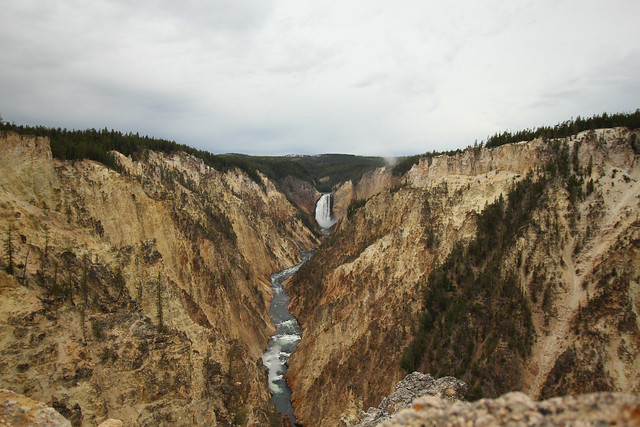 Artist Point is a small cliff that offers a magical view of the wide, v-shaped walls of the canyon and the rushing waters of the Lower Falls. Thomas Moran famously painted the canyon in 1872, though not from this spot. His paintings played an important role in moving Congress to establish the region as a national park. 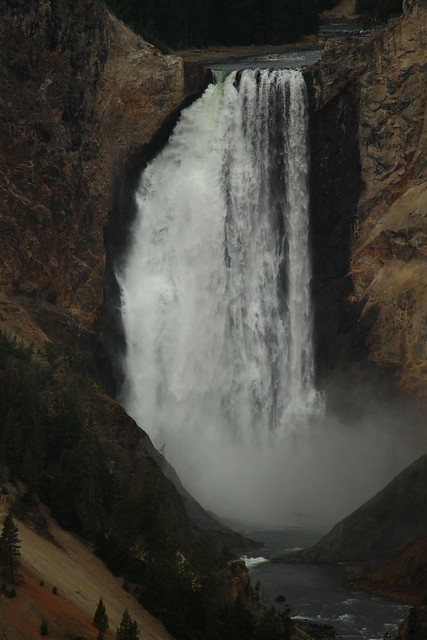 The Lower Falls are an impressive 308 feet high — the largest volume waterfalls in the Rockies.

“Home on the Range” serves as an unofficial anthem of the West — and if there is ever a place where the buffalo roam, it is definitely Yellowstone. Although, technically, they are not buffalo but bison. 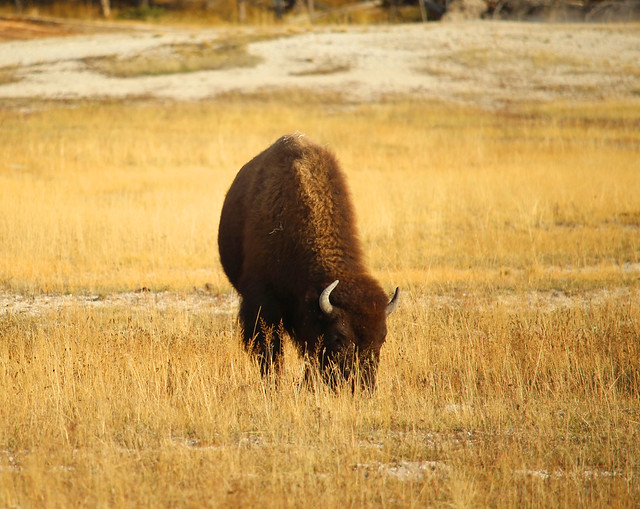 We got our best view of bison as they caused a minor traffic jam just outside of the Midway Geyser Basin. We snapped some photos from the safety of our car — we were not about to make the news for getting too close to these giant creatures to take bison selfies. Apparently not everyone felt the same way. Park rules dictate that you must keep a distance of 25 feet from bison at all times. 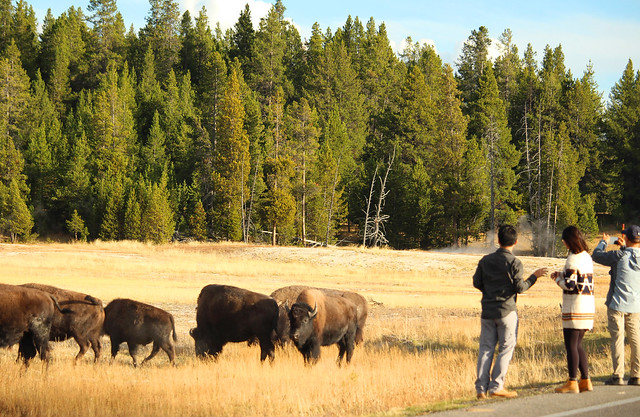 Besides bison, we mostly just saw deer and a few elk. 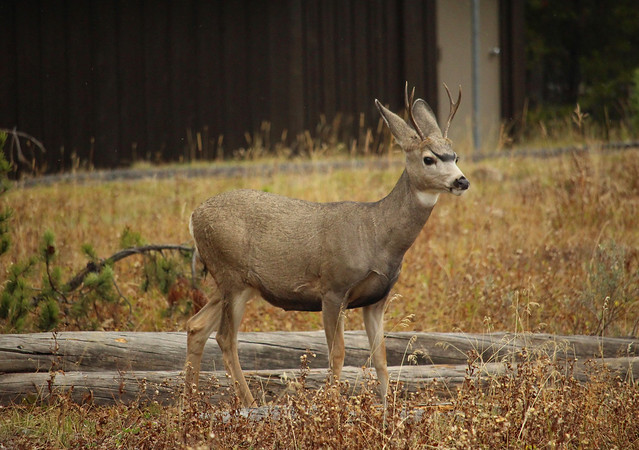 This guy (or gal?) was hanging around the Upper Falls of the Yellowstone River. 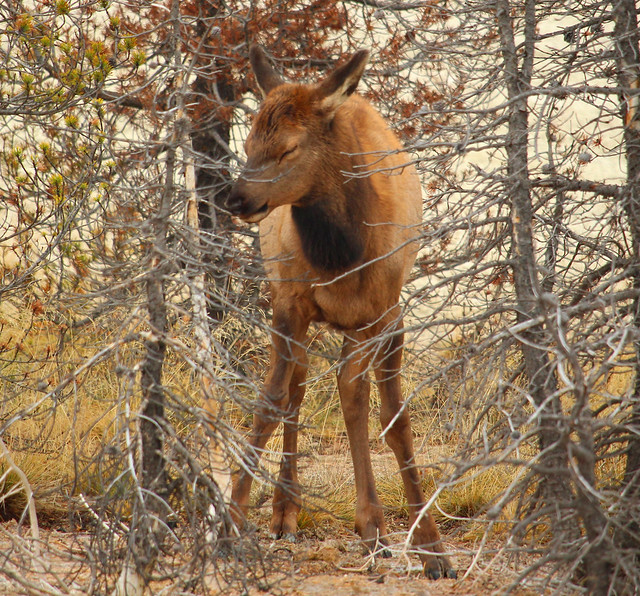 This gal was nibbling on trees in the West Thumb Geyser Basin (literally in the middle of it).

Rolling yellow hills and tall mountains dot the Yellowstone landscape in every direction. We decided to tackle one of the 10,000+ peaks, the easily accessible Mount Washburn. More on that one in another post! 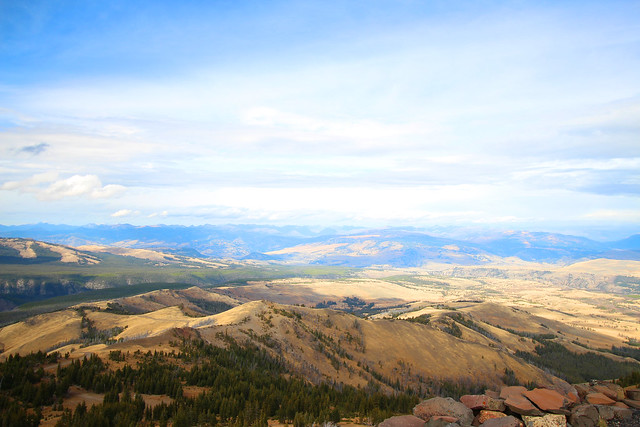 In our time at Yellowstone, we barely scratched the surface of what this park has to offer. I imagine you could spend a whole month there and never quite get to see or do it all! The park is 3.46 million square miles — quite the vast expanse of treasured land. There is no other place like it though — and it should be on everyone’s must-see list!

2 thoughts on “Yellowstone: Mountains, geysers and canyons, oh my!”