I like to call this story: “How I survived a death hike in the desert and lived to tell about it.”

The story begins at the end of our West Coast/Southwest tour, when I dropped Joel off at the Phoenix airport to return to Jacksonville for work, returned the rental car and just barely made my shuttle that took me further down the state to Tucson for the first leg of my solo adventure.

Back in 1991, my aunt, uncle and two cousins packed up and moved from the Garden State to the Grand Canyon State. Nearly 25 years later, my aunt and uncle are still there and now one of my cousins has settled nearby with her own family. Since ’91, I’ve seen them all in Hawai’i, my aunt and cousins in New Jersey multiple times and my aunt even made it down to Florida when Joel and I got married in 2013. But this was the first time I traveled out to Arizona, so I was finally able to see them in their home state.

My cousin Larisa, who is only four years my senior, suggested we go for a hike to give me a chance to see the area. I quickly jumped on the idea, even though it was supposed to be 100 degrees that day and I was nursing a sore foot after trekking three miles down and back up the Grand Canyon only two days before.

We decided to tackle the nine-mile Seven Falls hike early in the morning. Of course this was my first time hiking this trail, but Larisa had done it many times before (albeit not in the last few years, as she has two little ones). We ended up getting there between 8-8:30 and headed out. 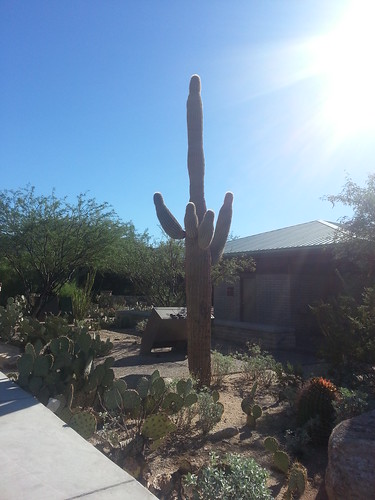 I snapped this at the trailhead. It was no surprise that there was a plethora of cacti in southern Arizona, but they were still a blast to admire.

It was pretty warm but comfortable as we got going. The first two miles of the trail are part of the Bear Canyon Trail and are relatively boring — flat sandy paths and a bit of road. Finally we reached the interesting part of the trail — the uphill through rocks, narrow paths and over the Sabino Creek. 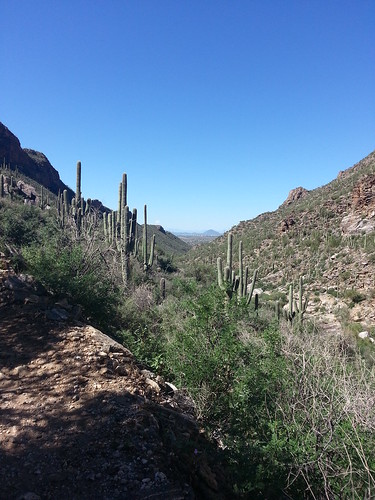 Coming from New Jersey, which is hilly and includes part of the Appalachians but is also basically sea level, and then living in Florida, the flattest state (literally), I was surprised at the elevation in Arizona. When I thought desert, I thought flat. I also thought wrong. First, even the flat parts have a decent elevation. Second, there was plenty of mountains and canyons and plateaus all around. It was quite beautiful actually. Especially the higher we hiked up! 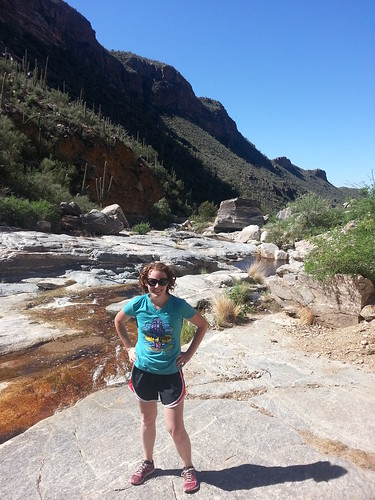 We had to keep crossing over Sabino Creek, which was easy in some parts where there were plenty of stable stones, but much difficult in others. There were several times where I gave up and sunk my shoes into the water to just get across. I realized after those few instances that in the desert, an moisture dries up pretty fast. This is important to remember as I get farther into the story.

After hiking uphill for a few miles, there is a prize well worth the effort. 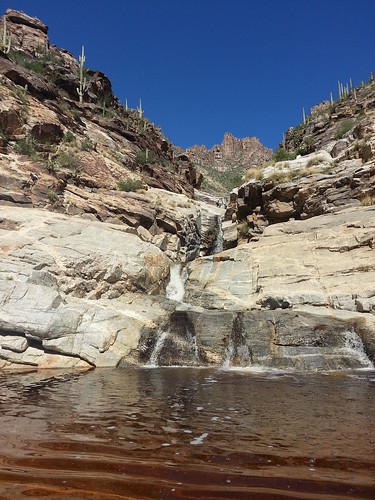 Ain’t it lovely? Water flows down the brown cliff sides into a pool of cool, fresh water. It’s a perfect place to cool off, especially as the temperatures rise… and rise did the temperatures as we chilled by the poolside. A few hikers that came after us chatted us up for a bit, before we decided it was best to get on before it got too hot. 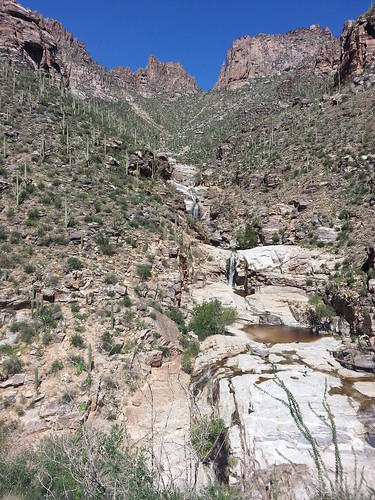 Too late. I drank the majority of my water (like five or six bottles worth) on the long, hot trek back. It didn’t help that I was slow-going downhill to avoid aggravating my sore arch (three steep miles downhill into the Grand Canyon took a toll). And it was hot. So hot that I kept saying “It’s SO hot!” until my cousin, half delirious, retorted back “Do you think its hot, Erin?”

Eventually my sore foot went numb. I drank as much water as I could but felt like I was drying up on the inside while simultaneously cooking. Every time I got out a new water bottle to try to keep hydrated, the water was almost to warm to drink within a few minutes. Where the hell was I? Oh yea, THE DESERT.

The worst part came when we got off the Seven Falls hike onto the Bear Canyon Trail, which inexplicably was somehow uphill AND on black asphalt. Whose idea was that? It felt like we were walking and walking and walking but not getting any closer to the parking lot. After what seemed like an eternity (in hell. Where its hotter than you ever want it to be), we made it to the end. We got in Larisa’s truck, to see a lovely 99 degrees show up on the temperature gauge.

But we survived. The worst was over, right?

That was, until we stopped for lunch and the keys were accidentally locked in the truck. 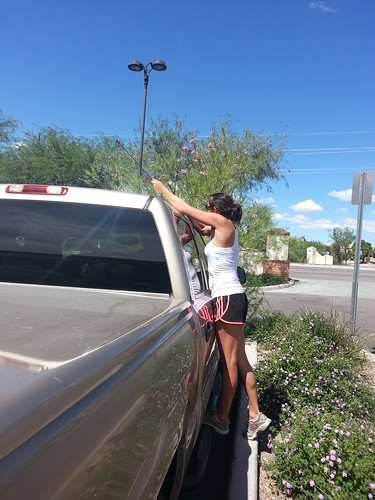 I learned several lessons on this little adventure. 1. Don’t go hiking in the desert when its 100 degrees out. 2. Always check for your keys before locking your vehicle. 3. The second lesson is especially important if you didn’t learn lesson one.

One thought on “Seven Falls Hike in Tucson”