We can thank the Colorado River for both man-made and natural wonders that we experienced on the last leg of our West Coast & beyond trip together. After spending a few hours at the magnificent Hoover Dam, we entered the great state of Arizona, bound for one of the seven natural wonders of the world.

Before Joel and I left for our trip, several people told me that pictures don’t do the Grand Canyon justice — you have to see it in person to really understand and enjoy how truly magnificent it is. And damn, were they right. There’s something completely magical and humbling about looking down into the great, colorful depths of the canyon and realizing that it was all created by a river, one that you can’t even see from the top, and that for million of years, humans and animals have looked down upon some similar version of the canyon.

We stayed in the Grand Canyon National Park. It made the most sense for us because we wanted to be close to everything, since we only had two nights there. We stayed on the South Rim at the Yavapai Lodge, which wasn’t the fanciest of places, but it was clean and reasonably-priced.

Our first night, we just chilled. After two weeks on the road, we took advantage of any time we got to just relax and enjoy a glass a wine or whiskey (I had to be really tired to enjoy a glass of whiskey). I had picked up a dry cough after spending time in a climate much drier that what I’m used to, so chill time was a blessing for my confused lungs. Especially since we decided to brave a hike into the canyon the next day.

We drove through sheer darkness to grab dinner at the Bright Angel Restaurant. I guess after growing up in the New York Metro area, I’m always amazed at how truly dark it can be when you’re in the middle of nowhere. The food was sufficient and we enjoyed local beers from the adjacent bar, and retreated back to our room to rest up for the next day.

On Saturday, we both woke up with the worst headaches ever. So our first stop was the grocery store to buy some ibuprofen. We also picked up a backpack there and ended up eating lunch at the counter they had there.

It was a beautiful day out, sunny and mid-70s, so we decided to hike in the early afternoon. We chose the South Kaibab Trail, since it was supposed to be well-marked, featured gorgeous views and was only a maximum of six miles down to Skeleton Point and back. We packed snacks, bottled water and took the bus out to the trailhead.

We were greeted with this view: 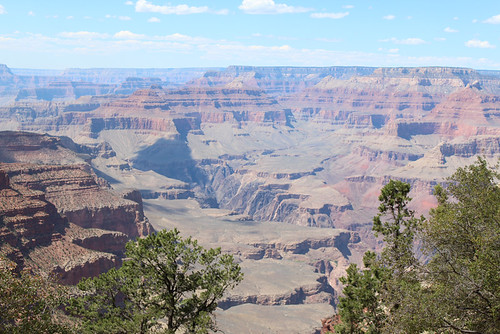 Shortly after embarking on our trip, which we suddenly realized was going to be VERY steep, we passed a few mules. They’ve gotta be wondering “How did I end up with THIS job?” 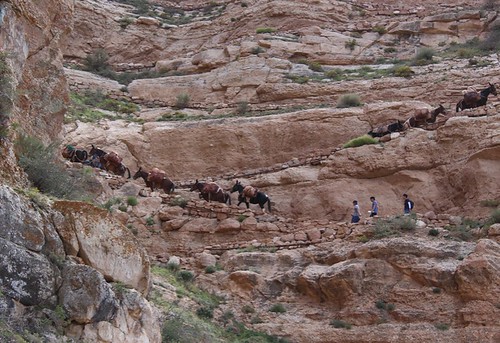 The upper mile or so of the trail (its three miles down) had a good amount of people on it. The first stop, the “Ooh Aah Point” was particularly crowded so we quickly oohed and aahed and got on our merry way, carefully watching our feet on the steep, steep trail. Occaisonally we looked up and stopped to capture the beautiful view. 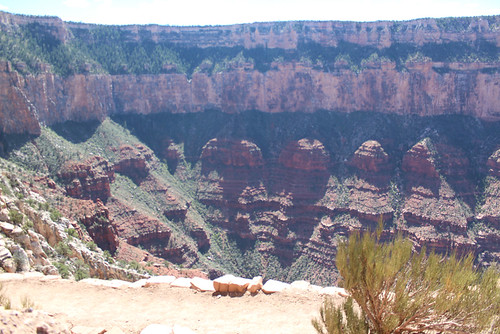 Cedar Ridge was the next stop, at a mile and a half down. It was a flat area where a lot of people stopped to rest. It also has a bathroom, which is convenient if you have to go. We didn’t end up using it at all because I’m pretty sure everything we drank quickly turned into sweat and evaporated. Regardless of the facilities, it was a quirky little rest area with some shade so we hung out there for a bit on the way down and back. 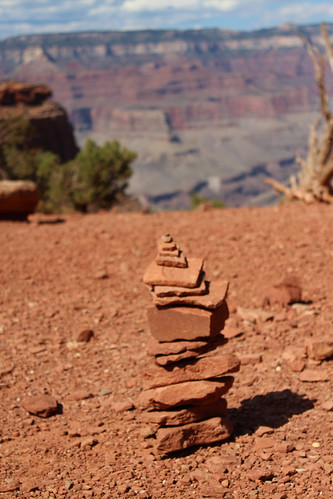 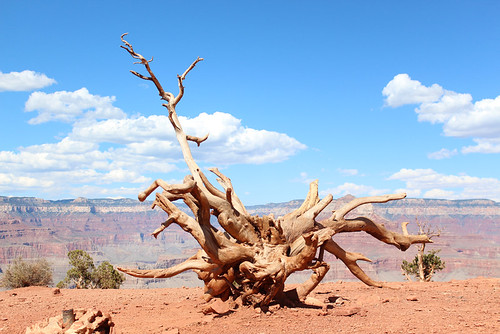 Once we passed Cedar Point, it got a lot quieter. As we continued our descent, we kept seeing this landmark below us: 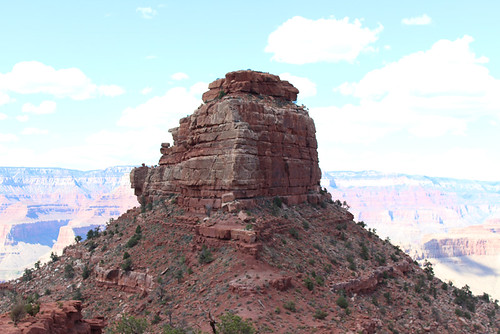 Until we passed it. 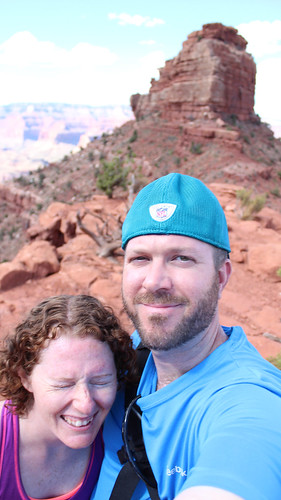 Blinded by the light. 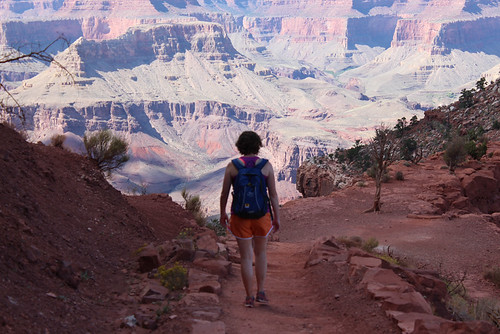 Eventually, we reached Skeleton Point, the final stop on the South Kaibab Trail. It was a long, steep way down but totally worth the fantastic view. 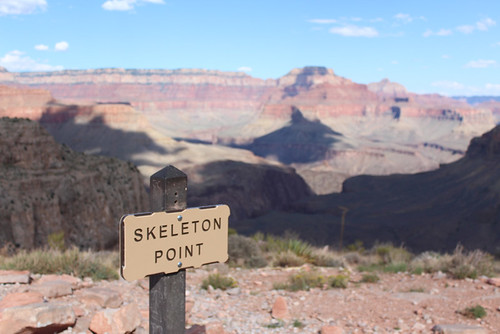 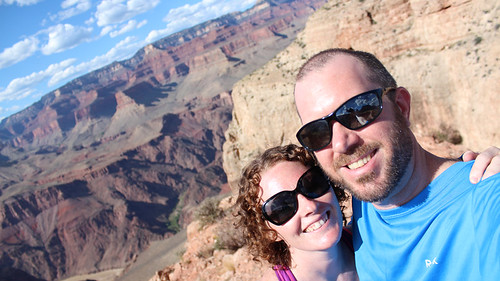 There was another couple there when we first got down to Skeleton Point, but they left shortly after so we basically got to enjoy the place by ourselves. Naturally, we took lots of silly posed pictures. 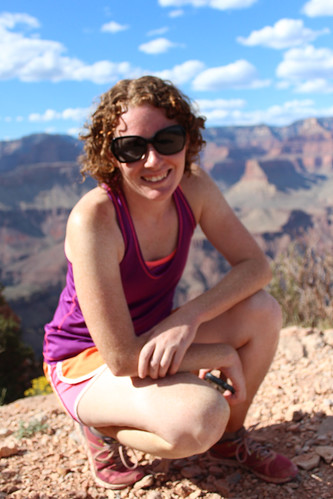 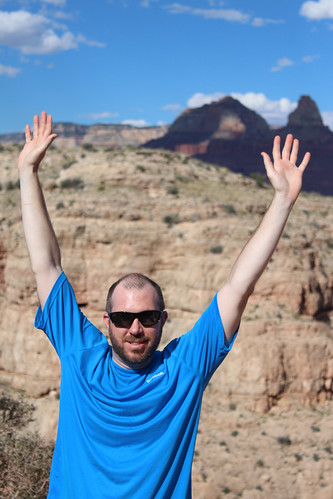 FINALLY, we could actually see the Colorado River. Barely. I wasn’t even completely sure at first if it was actually the river. 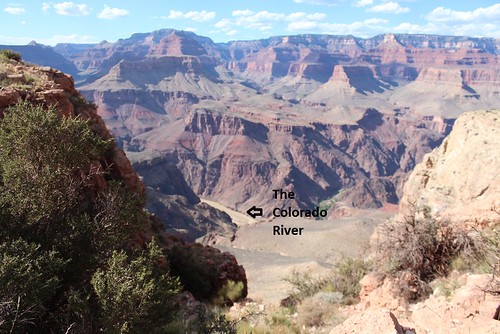 Then we headed back up. And it was so much harder than I ever imagined. So much harder. I don’t even think I can accurately explain just how hard it was. And I think Joel and I are in decent shape. No wonder we didn’t see a lot of people the farther we went down.

Somehow we made it back up to the top. We ran out of water about half a mile from the top so I recommend when you pack water for your hike and you think you have enough, PACK MORE. I had to stop and refuel on snacks as we got into the shade and I started too cool off quick and felt a little lightheaded.