After straddling the California Coast for a week, we headed inland for the next leg of the trip. First stop, Sin City.

We waved goodbye to the Hollywood Sign and sped out of town (as fast as the L.A. traffic would let us). We had four hours and desert as far as the eye could see ahead of us. Heading East on Route 15, we wound our way around mountains, up and down some decent elevations and through plenty of areas where I’m sure others have dumped bodies.

We stopped in Barstow for lunch. There wasn’t much to the place but its a pop culture favorite — mentioned in the song “Route 66,” a favorite of Hunter S. Thompson in Fear & Loathing in Las Vegas and Sheryl Crow makes a weird reference about staying there and finding truckers in her song “Leaving Las Vegas.” Anyway, since we were out West, we decided to partake in Barstow’s finest In & Out, mostly to see what all the fuss is about. It wasn’t bad. Maybe next time we won’t try it in the middle of the desert and will get better results. 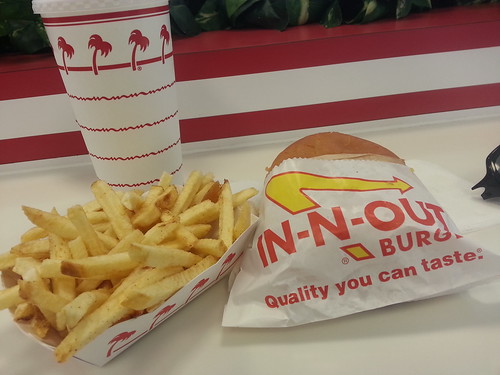 We got back on the road and drove through some more desert. The view was actually pretty beautiful, a far cry from the flat, tree-lined jaunt we take up 95 every year. The temperature gauge was steadily showing temperatures in the 100s, unless we were at a higher elevation, when it would drop to the mid-90s.

By the time we got into Vegas, it was nearly rush hour. After sitting in a little traffic, we got to our hotel, the Stratosphere, and just chilled for awhile. The sun was setting over the mountains, leaving the sky magnificent colors for us to enjoy with our customary evening glasses of wine.

The Stratosphere was pretty nice. It was incredibly reasonable in price and even though it was farther up the strip than a lot of the other hotels, it wasn’t an issue since the Monorail was only a few blocks away. The free admission to the top of the tower was a nice benefit too.

Once we were rested and refreshed, we took the Monorail down to the Paris. It was a quick ride, clean cars and not a huge crowd. Once we got out, we wandered through the Paris for about 10 minutes, trying to figure how to get out of the place. By the time we exited onto the Strip, I was a little (or a lot) annoyed, but luckily we were in for a lovely view: 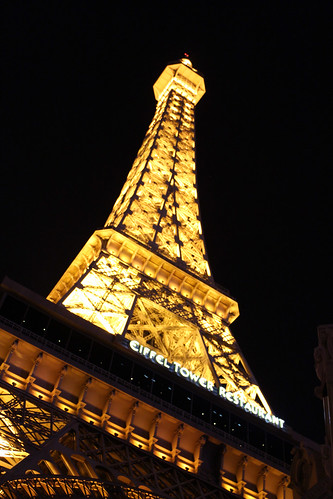 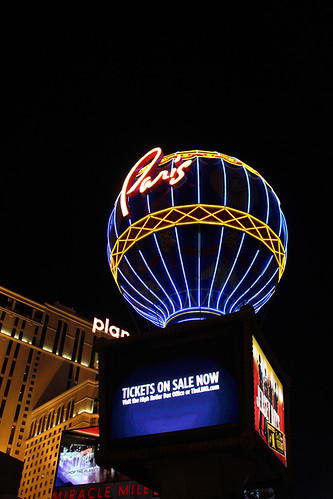 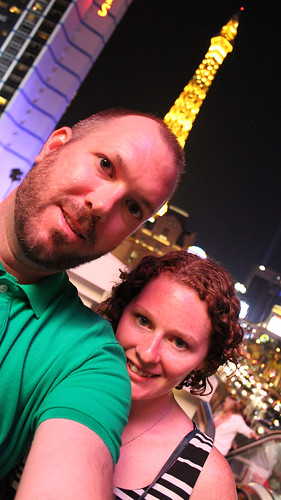 We crossed over the Strip (which was bumper-to-bumper traffic) to catch the fountain show at the Bellagio. Perusing the Vegas strip is definitely a night time activity. The lights of the casinos and the different shows really are amazing. How cool is this: 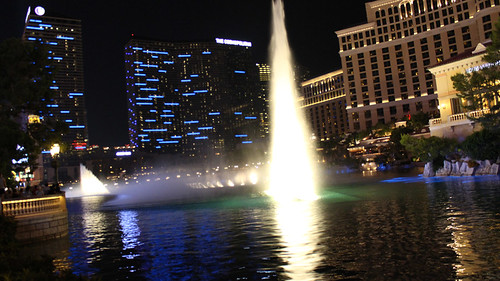 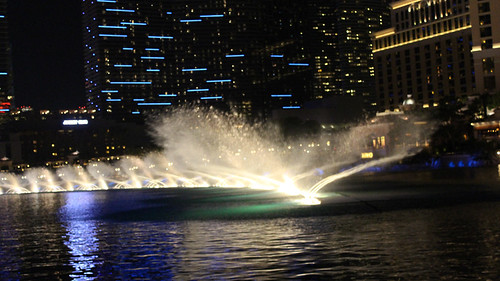 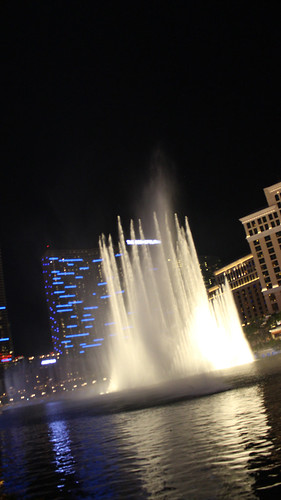 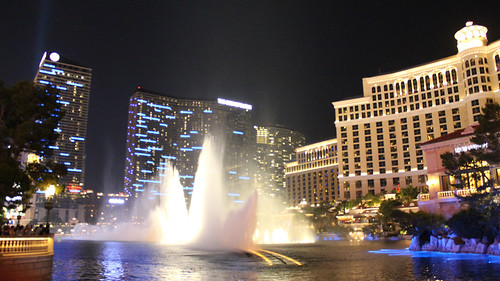 Afterwards, we headed into the Bellagio for drinks at the Petrossian. We had a great view of the casino floor, so we enjoyed a few cocktails and snacks while people watching. It’s amazing the variety of people in Vegas — there seems to be people from EVERYWHERE, of all ages, backgrounds etc.

While we were in the Bellagio, we checked out “Fiori di Como,” a glass sculpture on the ceiling of the lobby. It’s made of 2,000 hand-blown blossoms — another masterpiece by the awesome Dale Chihuly. I promise, it’s better looking in person. 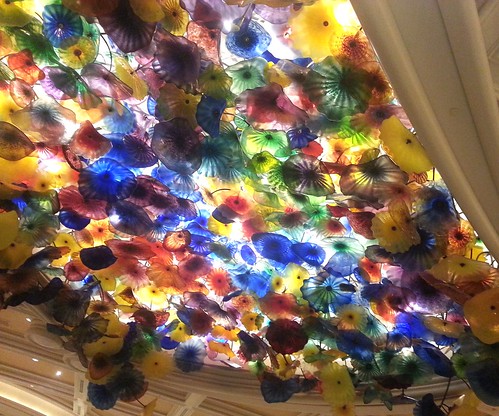 We also did some gambling… $3 worth. Yes, $3. I didn’t forget any zeroes. That was how many singles I had. And no, we didn’t come out ahead.

Also, we were surprised the quarter slot machines didn’t take actual quarters. And pretty disappointed too, because for some reason I had a ton of quarters in my purse.

We headed back to the strip to catch a late show at the Mirage Volcano. There’s definitely plenty of free stuff to do in Vegas if you’re visiting on a budget. Onto the Volcano… My biggest takeaway was that, damn, do those flames get hot. We could feel the heat and we weren’t even that close. No wonder they close it down when it’s windy! 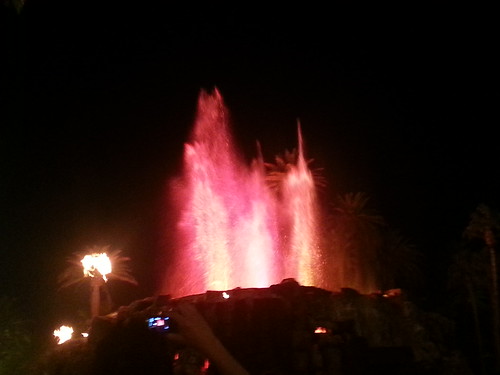 Basically everyone watching the show had out their smartphone, iPad, camera, selfie stick, etc. to capture it. I took several blurry smartphone pictures, including the one above, before enjoying the show with my eyes. You’re welcome.

After that, it was past midnight (and past our bedtimes) so we headed back to the Stratosphere. Of course, first we had to check out the hotel’s observation deck. We got free admission since we were staying there and it was definitely a view worth seeing. I imagine going up during the day would be pretty cool too, but the night view was killer. 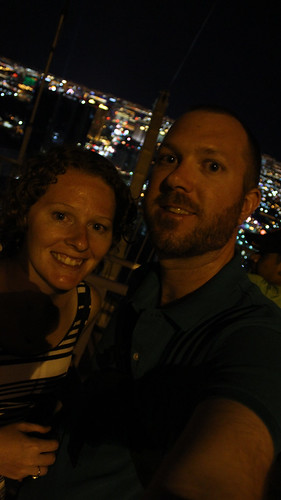 Overall, I wasn’t enthralled with Las Vegas. For one, there was way too many obnoxious people in one place. Beyond the tourists, it was too trashy and flashy for my taste. It didn’t feel quite as sleazy as the Hollywood Walk of Fame (or at least, I didn’t feel like I had to grip my purse so tightly) but it still felt like there was a thin layer of slime over some parts of the city. I guess if you’re into gambling that would be a huge draw to visit. But I went once, saw the sites and, frankly, that was enough for me.