As soon as we walked into our house (before it was our house) the first time, a sea of potential paint color started swimming through my head. A softer, brighter yellow for the living room. Definitely a nice navy for the hallways. A light, earthy green for the kitchen and bathroom.

I basically searched for different types of colors — robin’s egg blue, light green, bright yellow. I spent plenty of time on the site of Benjamin Moore, Sherwin Williams, Behr, perusing their color wheels and checking out their different collections. For each room I narrowed down my picks to a few colors. I also took the advice of one my favorite  blogs, Young House Love (see tip #3), and went with colors that looked a little tamer on paper in hopes I wouldn’t end up with an obnoxious, blinding shade that I would ultimately have to paint over because it kept me up at night.

One thing I DIDN’T do, which basically everyone on the internet suggested, was to tape up paint chips in different lights or test out colors on the walls. Basically I picked a color and that was that. That’s probably not going to work for everyone, but I’m more than thrilled with all my colors. My research is no joke — I seriously search and analyze before coming to a decision. So I was confident with moving forward in this manner. Ok, now on to the colors we chose (because Joel either suggested a color for a room or approved all of my colors. Marriage is a team effort blah blah blah).

Living Room. So we bought a house with a yellow living room. And decided to paint it a different yellow. When I say it out loud (or type it out loud) it sounds kind of silly, but it seriously made all the difference for the biggest room in the house. My main issue with the original yellow was that it almost blended in with the wood floors in the room. According to our realtor, it was because the yellow had red in it. Which is when I first learned that paint colors don’t come in cans you pick off the shelf, they are created at stores by mixing different colors together. Consider my mind blown. So when we headed to a local Benjamin Moore dealer to buy “Sundance,” a sunny yellow, we asked first which “colors” this yellow had in it. The answer was yellow and a little orange, so we felt good to go. I think the difference between the old and new yellows was best displayed when we finished painting the walls, and had left the back of the built-ins the original yellow (before I painted them “ultra white.”). The old yellow looked beige, not yellow, while the new yellow looked amazing. Mission accomplished. 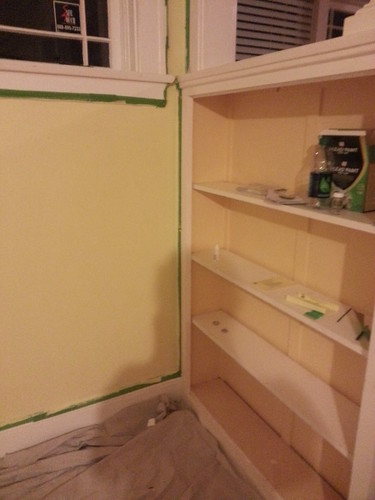 Above: I took this picture after a good 12 hours of prep work and painting the largest room in the house. It’s dark and includes my fabulous shadow. But it shows the differences between the new (wall) and old (built-in) yellows.

Below: Bright and sunny, the new yellow doesn’t blend in, it pops. 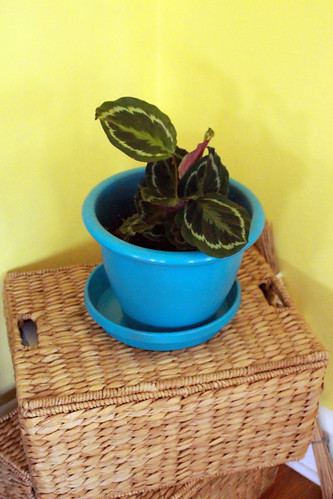 Dining Room: The dining room is one of the largest rooms in the house, with one wall taken up by the built-in bookcases, another wall full of windows and the other two walls pretty big and uninterrupted. The room had the potential to be big and bright but when we first saw it, it was a horrendous dark orange. I’m not against orange, or dark orange, but this was not the right color for the room. I was stuck with what color to go with, when Joel suggested a light blue. I started searching robin’s egg blues and was sold. We finally settled on Sherwin Williams’ Meander Blue. What a transformation — it was definitely now the bright room we wanted. With two large walls of the color, I definitely spent the most time contemplating which shade of blue was the perfect shade.  We decided to prime this room first, since we were going from such a dark color to a light color. That was definitely the right choice, as two quick coats of paint got the job done. 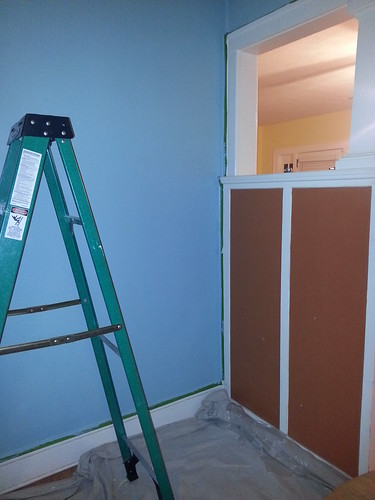 Above: This color is incredibly hard to photograph. This picture isn’t really a true representation, but it shows the contrast of the new blue and old orange. Such a major difference.

Below: The photo below is a little truer to the real color, but still a bit light. 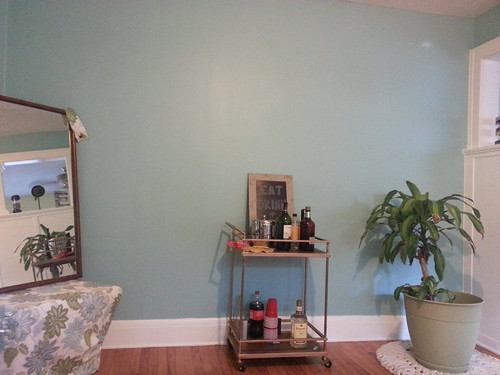 Kitchen: I can’t quite understand why the choice was made to paint the kitchen a light bluish gray, when the backsplash was gray and the counters a mix of blue and gray. So of course, my priority was finding a contrasting color to really make the walls pop. After looking at the granite countertops on one of our visits, I saw a tiny bit of green in it. After a bit of searching, I landed on Sherwin Williams’ “Great Green.”

Above: Before painting (this is one of the listing photos). The second photo is from when I tried out a feature on Sherwin Williams’ website to see how the color Great Green would look in the room. It wasn’t 100 percent accurate but gave a good idea of how the change in color would look.

Below: After we finished painting the new color. 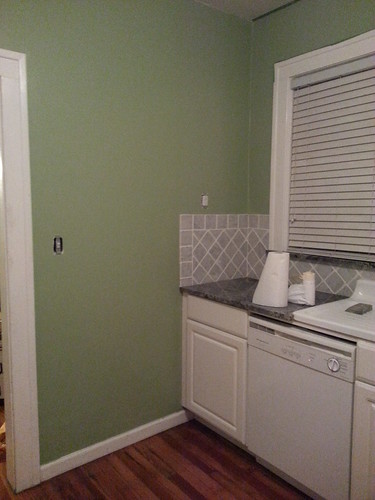 Bathroom: Again — light tile + light wall color = IT ALL BLENDS TOGETHER. We decided to use the Great Green in the bathroom too. It popped beautifully against the beige tile. 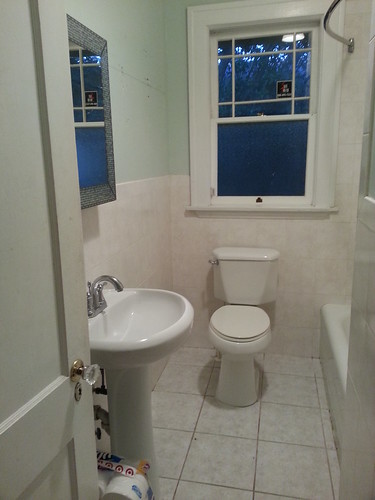 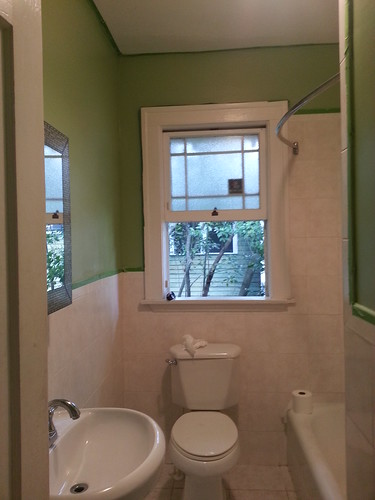 Bedroom: We decided on red for the bedroom because it would complement our dark espresso bedroom furniture well. After settling on a few different Behr shades that I liked, I ordered samples of California Poppy and Classic Cherry.  I really wanted to love California Poppy. And I did love it. Joel was another story, but in the end I really had to admit it was a tad too bright. So onto slapping some Classic Cherry on the walls.

Even though I love the color now, I have to say I seriously cursed our decision when we were actually painting. After painting light colors, I didn’t think twice about going with a dark color. So coat one goes on. It looks blotchy and barely covers the teal underneath. And those patch spots (which were plentiful — gotta love people who nail the most ridiculous amount of shit to a wall)? Oh so noticeable! Second coat goes on. A little better. Despite being short on time before moving day, we managed to fit in a third coat the next night. Beforehand, I painted over the patch spots to cover them up a bit more. Coat three was a million times better — yet still way short of where we wanted to be. But in the end, we decided “eff it.” It’s not like anyone but us is going to spend a ton of time in the room, nor is the casual guest going to notice the imperfections I probably seriously over analyze. 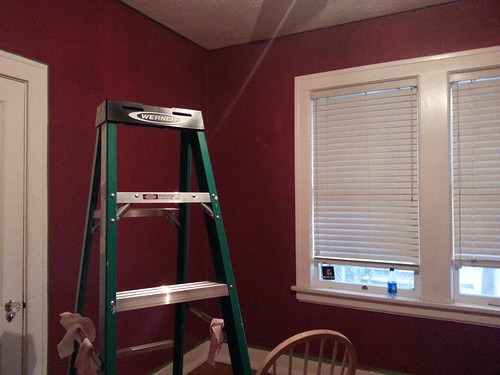 Above: Oh lovely red, you are the color of my hair, but never again will you be a color on my walls.

Below: I used the rest of the red paint on our living room coffee table and end table. Our fireplace is red, so I wanted to keep the red theme going. Painting these was a much better experience than the great bedroom painting debacle of 2014. 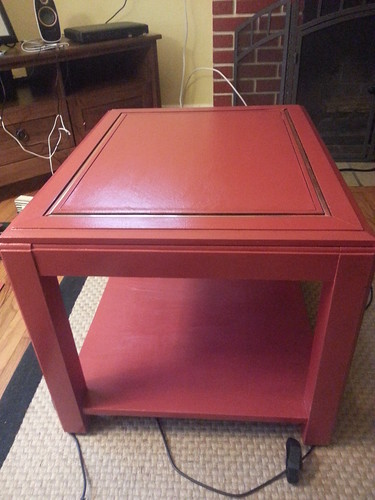 Hallways: Our final painting adventure (a month after we moved in) was the breakfast nook/old butlers pantry and back hallway. I wanted a slate blue and on a whim, went with Behr’s “Southern Evening.” Honestly, it might have been the name more than the color that won me over, but nonetheless, that is what ended up on our walls. After finishing the job, I saw a theme: our living room was “sunny,” our dining room was a sky blue and the next room, the nook, was the night sky. Slightly poetic. Definitely not planned. But it felt right. 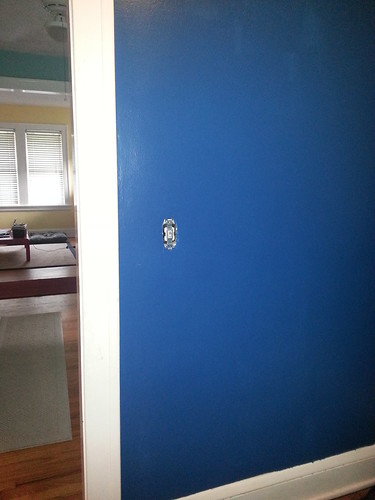 Above: This color is, like the dining room color, hard to photograph. This is probably the best representation and bonus, you can see the sun and day sky in the background!